Hot Press: The EU has just signed a tariff deal with Brazil, Argentina, Uruguay and Paraguay which will allow them to sell cheap beef into Europe, so that they can afford to buy more Viagra, Skodas, Zanussis and Airbuses. Predictably, the Irish Farmer's Association objected to competition in the beef sector. So far nobody from the IFA have thought to turn the threat into an opportunity.

Years ago (12? 13?), we were working to discover the difference between the immune systems of chickens and people to understand why Campylobacter jejuni is a normal member of chickens' gut flora but will be rejected in a mighty watery flush by your intestines. Please cook your chicken properly . . . or talk to the porcelain telephone; your body, your choice. The research was funded by the Department of Agriculture in a cunning scheme called FIRM the Food Institution Research Measure. At one point the DoA had an Open Day for FIRM and invited all the groups they had funded to summarise their research on a poster. K, the other senior scientist in our group, had a good graphic sense and a solid view of what the project meant, and he produced our poster. It won first prize and €1,000! Later, everyone was invited to an evening session at the Royal Irish Academy to receive prizes, do photoshoots and participate in a panel discussion about the Future of Irish Agriculture. 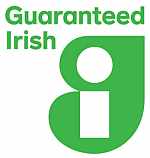 The panel was chaired by Prof Paddy Cunningham, who taught me everything I know about additive genetic variance, milk yield in cows and back-fat thickness in pigs and was at that time the Government's Chief Scientific advisor as well as the owner of a prime 80ha. dairy farm in Co. Meath. I've written about his key coordinating contribution to averting a potential eco-agri disaster when invasive screwworms Cochliomyia hominivorax were identified in North Africa. Assuming that Ireland's Farming Future was likely to involve something other than same old same old, I floated the idea that Ireland could rebrand itself as Four Green Fields - the place where Guaranteed Irish was synonymous with sustainable, organic, free-range, agri-ethical  SOFA . By dumping Dithianon, Fludioxinol, Glyphosate, Ivermectin, Permethrin, Phencyclidine, Tetracycline, coupled with a mighty marketing campaign, Brand Ireland would sweep the world with added-value clean food.

The silence that greeted this proposal was deafening.

At about the same time [2009] as that event Pat Brown was interviewed by the redoubtable Jane Gitschier in PLOS Genetics. That was fitting because Brown was one of the founders and co-creators of the PLOS way of publishing science, as well as the inventor of DNA microarrays and making numerous other break-throughs in the understanding of how the biological world ticks. The most striking part of the interview for me was this right-angled right-on change in direction:
Brown: OK—I'm serious, and I'm going to do my sabbatical on this: I am going to devote myself, for a year, to trying to the maximum extent possible to eliminate animal farming on the planet Earth.
Gitschier: [Pause. Sensation of jaw dropping.]

Immediately after this statement, Brown cashed in his sabbatical chips and set about giving the world an alternative to hamburger.  The result has been the creation of a product called the Impossible Burger which is designed to be as nearly like hamburger without incorporating any animal parts. No animal parts, means no animal farts or burps which means that Impossible Foods are good for the planet. Back in 2009, you'd have to have been particularly on the pulse of prescient to appreciate that methane from ruminants was the real planet killer. In 2009, it was the inefficiency of converting soy Glycine max and corn Zea mays protein into animal protein and the huge consumption of water in the process of feed-lot economics. Impossible Foods claims the ethical and economic high ground for giving Western consumers something that looks like hamburger, tastes like hamburger but is almost wholly artificial. Pat Brown declares: “We use genetically engineered yeast to produce heme, the 'magic' molecule that makes meat taste like meat — and makes the Impossible Burger the only plant-based product to deliver the delicious explosion of flavor and aroma that meat-eating consumers crave.”

Jaysus Pat, you really need to get out more! There's a billion people in India and another billion in China and another billion in Africa who get by for weeks and weeks without eating hamburgers but getting a really delicious explosion of flavor and aroma from lentils, beans, rice, wheat, millet, teff, and a pinch of spices. Hamburger is not a miracle food it is rather a convenience food that costs little, tastes of nothing much and importantly is displayed to consumers in a homogeneous blutt on a styrofoam tray covered in Saranwrap™.  That way consumers can complete a mental disconnect between the food on their plates and the horrors of the feedlot and slaughterhouse.

I haven't followed the journey from  Pat Brown's worthy and commendable less meat to meatless aspiration from 10 years ago but it seems damnably reductionist to claim heme as the magic ingredient that makes meat taste meaty and then go off to find a similar molecule that is produced by plants. In 2016 Impossible Foods launched their first burger recipe: Water, Textured Wheat Protein, Coconut Oil, Potato Protein, Natural Flavors, 2% or less of: Leghemoglobin (Soy), Yeast Extract, Salt, Konjac Gum, Xanthan Gum, Soy Protein Isolate, Vitamin E, Vitamin C, Thiamin (Vitamin B1), Zinc, Niacin, Vitamin B6, Riboflavin (Vitamin B2), Vitamin B12. The company is equally transparent about the Table of Contents in their new burger: Water, Soy Protein Concentrate, Coconut Oil, Sunflower Oil, Natural Flavors, 2% or less of: Potato Protein, Methylcellulose, Yeast Extract, Cultured Dextrose, Food Starch Modified, Soy Leghemoglobin, Salt, Soy Protein Isolate, Mixed Tocopherols (Vitamin E), Zinc Gluconate, Thiamine Hydrochloride (Vitamin B1), Sodium Ascorbate (Vitamin C), Niacin, Pyridoxine Hydrochloride (Vitamin B6), Riboflavin (Vitamin B2), Vitamin B12. Hey look Ma, no added salt! Whatever reservations you might have about the sketchy way in which commercial beef is raised in the USA at least the product is simple: it's a wonder and a miracle that evolution can deliver a product that the human palate can desire and the human gut can digest. Look at the complex chemical cocktail the Impossible's ingenious food engineers have cobbled together to make an approximation of the real thing. Their shareholders and bean-counters accountants must love the fact that the most abundant constituent is water. But if this is the answer to the damage meat does to the health of people and planet, then it is the . . .

. . . to the drawing board. Or to Gurdwara Bangla Sahib in Delhi to see how they feed [and mmmmm good] the 5,000 every day without meat. Call me a protestant, but if you're to be part of the solution you need to make some sort of sacrifice: put aside your unconsidered certainties - here the invisible background of meat with every meal - and try a new approach to feeding yourself and your family. Just this spring, the Irish Farmer's Association had an End of The World hissy fit when it was humbly suggested that school dinners could change the menu just to embrace meat-free Mondays.
Posted by BobTheScientist at 07:35