'Tis an ill wind that blows no good. Much as we all deplore filling the oceans of the world with plastic crud, at least its existence keeps me off the street and on the beach in the hope of finding more and bigger toys buoys for my collection. One man's trash is another man's treasure and Paddy the Shears was delighted when I presented him with two hanks of nylon rope which I had salvaged from the tide line. A farmer, like a sailor, can never have enough quality rope. 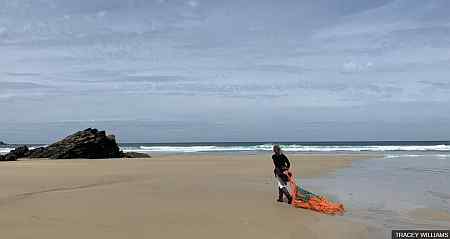 I'm not the only one who scans the seaweed for a glint of orange.The picture above by/of Tracey Williams of Newquay, Cornwall captures the solitary joy of a coup de mer. It's from a BBC story about the Maersk Shanghai which shed 70+ of its containers in a storm off North Carolina 15 months ago. Later in the year, hundreds of trainers started to wash up on beaches on the other side of the Atlantic. Ireland, Cornwall, the Azores. By no stretch could this be considered 'News' although it was published as such on 19 Jun 19. But the gloss which the Beeb put on the story was that these running shoes were data for oceanographers. A pair of trainers in a box 11 x 21 x 31 cm fills 0.007 cu.m; which means that a 40ft shipping container holds about 10,000 of them. If they are all spilled into the sea at the same place and time, their distribution over the succeeding months can tell scientists a lot about the speed and direction of ocean currents like the North Atlantic Drift.

If this is ringing a faint bell of recognition, as it did me, then it's likely because of a similar story dating from 27 years ago when a container full of rubber ducks fell off a ship into the Pacific and were found all over the littoral surrounding that mighty ocean.  It made the name of Curtis Ebbesmeyer, who was an early adopter of statistical analysis of gyring detritus. We now know how long it takes to make a single turn round the block in the Pacific - always contingent on whether the markers are floating high (and so having windage) or are barely awash. Dr Ebbesmeyer runs a site Beachcombers Delight and will take subscriptions for his newsletter.
Posted by BobTheScientist at 07:47