Eat food. Mostly plants. Not too much.
I try, I am trying, I am very trying about food. Keep it simple, make it yourself, it's not that hard and not that time-consuming and the number of ingredients falls off a cliff.
Eat hamburgers: one ingredient (ground beef).
Eat Impossible Burgers: 21 ingredients [having a Shame! swipe earlier in the week]
To Be Frank [as a change from being Bob], I rarely eat hambugger and more or less never buy the stuff. For a while earlier this year, my meat fix was ground pork, which was very pink, 400g would go a long way: a burger, a couple of pasties, spag bog. In fact 400g would see me[at] through the week for €2. When we want proper meat we go to Mr Dunne the Butcher in Btown. He can actually butcher a hawg, rather than just selling stuff butchered by Letts in a factory far, far away. And he has sourced a number of local, organic, free-range producers. 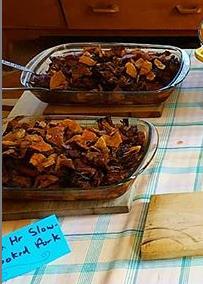 For the solstice this watershed [Y=65] year, I bought a whole shoulder of pork [weighing 6kg] from Mr Dunne and Dau.II aka Cookie put it in the oven for 24hrs at 105°C - dang but it was good as in Carolina BBQ good. Keeping it simple meant that we could feed 40 people (see L [source] with seconds . . . and ahem, thirds but who's counting) for €30 [= €5/kg] and still be eating left-overs the following week. Those left-overs were aliquotted into plastic snap-lid Chinese take-away containers, of which we have a regular supply because some of our cash-rich time-poor rellies do that sort of thing. Although those take-away containers are designed for one-time use - just robust enough so they don't collapse if stacked 6 deep in a carrier bag - their life-time use can be extended indefinitely and used instead of Tupperware (or similar) for which you have to pay ca$h-mon€y.

As well as eating through left-overs when I'm alone in the house - which is about 50% of the time given the elder care and other rotations - I also make all the bread, buns, scones, pasties, pastries and cookies. But far the handiest way to pause this bakery [rest those croissants in the fridge for 30 minutes between roll-and-folds etc.] is plastic bags. But do I buy plastic bags? No sirree, I do not: there is a goodly supply coming through the kitchen from other products. Some are more use than others and some are so flimsy that one-time use is all that is possible. Rocket leaves, baby spinach, mixed salad leaves - those bags go straight to landfill - for shame. Bags for cheese, shop-bought bread, granola are much more robust and get several uses in my kitchen because we're not above washing them out.

Whoa?! is that a good idea . . . for the planet?  Does it cost more carbon to use hot water and dish-soap than it does to make a new plastic bag in a factory in China? You can obsess about the economics but we live too remote for trash collection so are more careful than most about separating and re-using our discards and even one reuse is better than no reuse. The average lifetime use for a plastic bag is 12 minutes; which is the same as the average lifetime use for an electric drill. NPR had an interesting essay on the unintended consequences of plastic bag levies. 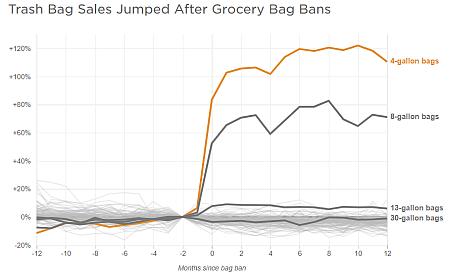 Without an inexhaustible supply of 'free' plastic bags just robust enough to carry groceries from shop to car, consumers had to add 'garbage bags' to their shopping lists and create a market for heavier bags that last longer and are more effective in suffocating seals.