Iris Murdoch was born 15 Aug 1919 in Phibsborough, Dublin 7 and lived briefly in Blessington Street before her Dad shipped the family off to London in search of work. Perhaps, as a Protestant from The North, he saw the writing on the wall in revolutionary post-war Ireland. In any case there was a massive diaspora of the Protestant middle classes between the Wars leaving a space to be filled by aspiring Catholics. My Grandfather bucked the trend, securing a peach job as harbour master in Dunmore East at the foundation of the Free State.  Like my father, who spent a much longer time growing up in Co. Waterford, Murdoch never lost her sense of feeling Irish. Although she was not without a sense of shame at the antics of Irish people in the political sphere. They both spent the rest of their lives working in and for the British establishment - both being awarded a CBE. Maybe someone who cares will edit the Iris Murdoch wikipedia page and put her in a green jersey: Dame Jean Iris Murdoch DBE (/ˈmɜːrdɒk/; 15 July 1919 – 8 February 1999) was a British Irish novelist and philosopher. 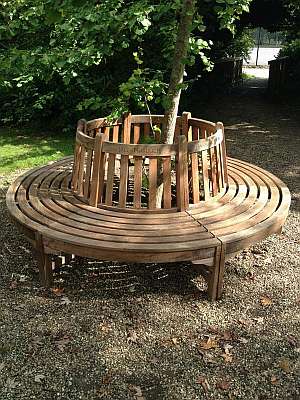 In England, she had a rather free-wheeling education but went up to Oxford U in 1938 where she read classics and philosophy and secured a First in Literae Humaniores, = Greats. After a spell working with /for refugees in Austria at the tail end of the war, she returned to Oxford, becoming a lecturer and fellow of St Anne's College. Philosophy is waaay over my head, so I won't attempt to explain what her conclusions amounted to.  As well as the day job in college, she churned out a couple of dozen novels between Under the Net in 1954 and Jackson's Dilemma in 1995. Here's Denis Healey, fellow-traveller and later Chancellor of the Exchequer remembering her contributions. Here she is comparing one's literature with one's philosophy: novels are a lot more fun! The Man has put up a commemorative bench [appropriately on The Left here] in Lady Margaret Hall, Oxford. I like the idea that to sit here you have to look outwards.

She is twenty years dead now and the Dublin literary establishment is pushing out the commemorative boat; with a exhibition in Phibsborough branch Library and a showing of the biopic Iris tonight in the IFI at 1830. It stars Kate Winslett as I.M. Jnr and Judi Dench as I.M. Sr, so should be good. Clip Iris on Education and song. In the twilight of her years her great mind slipped its cables and drifted out to sea on SS Dementia. But that's okay, she made a contribution to our understanding of the human condition, which will probably be recognised as worthy in 100 years time. There aren't many 20thC novelists about whom that could be said. Hats Off!
Posted by BobTheScientist at 07:54