The contribution of others

Last year, the Blackstairs Farming Group landed a huge grant of money to become a pilot study for the sustainable development of Ireland's Uplands. Then they allocated a wodge of that money to the commonage where we run our sheep; and indeed run ourselves if we need a long, largely solitary, walk without having to get in a car. Our 'hill' is 200 hectares but, like the Backstop, bleeds into other commons with porous borders and no impediment to travel. If you go missing up there, then mountain rescue needs to scour something like 3500 hectares [say 6km x 6km] if they assume that you haven't crossed any roads. Last Summer, before Blackstairs Farming Group was really flying, we got to know the area quite well because we had 8 sheep on the mountain grazing heather and needed reassurance that they hadn't died like the unfortunate EI-00445355-4639E. Eventually, with help from two counties-worth of farmers, we got all our ewes back before Winter.

The Blackstairs scheme is partly designed to persuade farmers to co-operate more rather than pursuing their own interests in the quintessence of help-self capitalism. As illustrated above, they do a pretty good job of helping each other out and, in general, not spitefully doing each other in the eye . . . even if they won't willingly talk to the neighbour whose grandfather was slighted by their own: in 1947, in the Mart, at Carnew, it was September, drizzly, shortly after Aunt Mary died of consumption, forget nothing, embellish a little. The first steps to co-operation have been to hold a number of meetings to agree a plan of action that will help develop a better, more diverse, more generally productive, more interesting, dry heathland ecosystem for the sheep to share with grouse Lagopus lagopus scoticus, heath bedstraw Galium saxatile, golden plover Pluvialis apricaria, tormentil Potentilla erecta. There has been a quite understandable reticence in articulating what to do to earn the money, which the Department will only pay out if Deliverables have been delivered.

The Blackstairs Boondoggle has given me an excuse for getting out and about more and for reasons other than scanning the hillside with binoculars for distant white dots with blue LBs on the left haunch. Although yesterday at 1604hrs I found 3 of the 8 which are meant to be somewhere in the sea of heather  and bracken and got close enough to the skittish beasts to snap a pic: 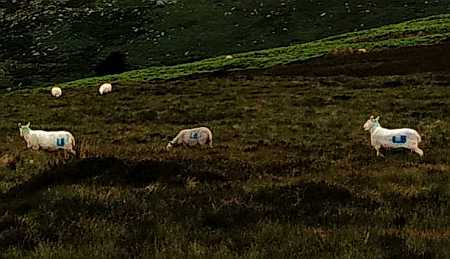 I have undertaken to record evidence [with GPS coords] of trees and shrubs which are to be extirpated to maintain the dry heathland which sheep grazing has created from the primeval dark forest over the last few hundred years. But I am also recording evidence of another use for the hill: as a quarry for granite sills, lintels, gateposts, and artwork. Thursday arvo, I spent 3 hours on quite superficial coverage of the 25-30 hectares nearest to the mountain gate where Hickey's farmstead ends and the Commonage starts. I am getting to know a Redmi Note 5 which The "Of the Generous Hand" Boy gave me for joining the Greys last month. Yesterday, Friday, I was off again more or less making a complete clockwise circuit of our Common: documenting trees, worked stone, known natural landmarks, the state of the 'mountain wall' and its rough secondary gateways. In July, the bracken gets shoulder high which can make walking a struggle and also a hazard because it obscures footing. It may also be a carcinogenic hazard when sporulating [now] . . . and harbour sheep ticks Ixodes ricinus. So I should really have been doing this sort of yomp in March or May when it was wetter, yes, but easier to walk without worry, too. It took me just four hours, including pauses for photos, scanning the horizon, and striking manly poses on top of boulders [I haven't yet, you will be pleased to hear, mastered the use of camera for selfies].

I came down home as the Angelus rang across Catholic Ireland, and I was as bushed as our hill - which is to say, superficially.  Accordingly, I took off boots and socks, made a rehydrating cup of tea and sat on the stoop to reflect on an afternoon without human contact. Sometimes I sets and thinks and sometimes I just sets. I hadn't been at this above ten minutes, when a fancy new white car hove into our yard, paused for a good long gawp, backed out again and parked in our lay-by on the opposite side of the lane. It was soon joined by a slightly older black car; and the two vehicles debouched 8 or 10 people a-whoopin' and a-hollerin' in Spanish. After much 'organisation' the party set off up the hill without pausing to say ¡Hola! , let alone asking ¿puedo aparcar aqui?.  Must be shy, I thought, charitably. I finished my tea, went inside and, sometime later, vaguely heard the Spaniards return to their cars, have another noisy post-mortem and drive off . . . leaving three urine-dabbed tissues behind for somebody else to pick up. Well really! as Bill Bryson is wont to say.

Vergüenza - a pretty name for a girl?
Posted by BobTheScientist at 08:08