Ross Perot was smart, talky and ambitious. After a not notably exciting career in the US Navy during the Korean War, Perot joined IBM to sell office kit in 1957. It was a good time to start as the Suburban Corporate Paradise years started to feed the desire for Stuff: houses with lawns, cars, fridges and ice-cream. He sold A Lot of product for IBM but couldn't get his line-managers to change the corporate culture to match his ambition. So he left to found EDS Electronic Data Systems, recognising that there was a hole in the market between hardware and software. Part of his drive was disappointment that Corporate America had the money to buy computers but not the sense to know how to get value from them. EDS got data off paper and into digits and showed how the information could be induced to sing dollars. The US government, Medicare, insurance corporations, credit unions, travel agencies handed him millions to leverage billions in savings and expansions. Twenty years later in 1984, Perot played his exit strategy and sold EDS to GM for $2.5 billion. He was a rich man.

In 1979 as the Iranians replaced the Shah with Ayatollahs, two EDS employees were imprisoned in Tehran. Perot bankrolled their rescue from jail and abstraction from the country in a way that was elegant and efficient and used appropriate technology.  The following year Jimmy Carter authorised a large covert military plan to rescue the US diplomats held hostage by the revolutionary government of Iran. Operation Desert Claw was costly failure and led to the deaths of 8 US servicemen. Perot's positive experience in Iran positioned him to work later for the rights and rescue of the POW/MIA servicemen left behind in Vietnam. Perot was sure that US Government agencies were complicit in leaving The Boys behind in the interests of the cynical Realpolitik of geopolitical economics in SE Asia. 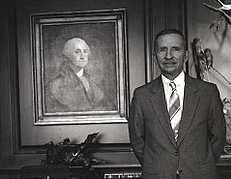 In 1992, Perot [shown R in 1986 with George Washington] ran an on-again off-again campaign for the Presidency as an independent. George Bush Snr was beaten by Democrat Bill Clinton but Perot obtained 19% of the popular vote. Just like in 2016, there was a wide-spread disillusion with the Red v Blue status quo. With the intrinsically conservative mechanisms of US Presidential elections, Perot secured no seats in the Electoral College. But his contributions to stirrin' it up were welcome. In the TV debates he was deemed to have 'won' with his different views: "Keep in mind our Constitution predates the Industrial Revolution. Our founders did not know about electricity, the train, telephones, radio, television, automobiles, airplanes, rockets, nuclear weapons, satellites, or space exploration. There's a lot they didn't know about. It would be interesting to see what kind of document they'd draft today." Four years later, Perot ran another spoiler campaign for the Presidency but his popular support halved . . . and his campaign secure no seats in the Electoral College.

On contrast to more recent Haves of the Patriarchy, Perot was in favour of taxing the wealthy and supporting entrepreneurs and potential wealth makers. But he was generally liberal in his leanings: pro-choice, gay rights and, peculiar for a Texican, keen to limit the sale and distribution of guns to the general public. He's gone now, but not forgotten as a might-have-been game-changer.
Posted by BobTheScientist at 07:52