The flush toilet is a terrible thing because it disconnects us from our own ordures: flush! flush! all gone! . . . to a place where somebody else [probably an untouchable] will deal with it. I am surprised at the number of people, even blokes, even blokes of my age, who are almost unable to have a pee anywhere other than in a designated toilet. Then again there is this obsession with TP / tissue that a) has to be used to dab-it-off b) left behind. I mentioned a particularly espanish egregious example a couple of weeks ago of people contributing their wee-litter to our farm. It was a perennial problem walking the Camino, where any and every secluded spot just off the pilgrim highway, where you might think of having a discrete pee, would be dotted with evidence that you weren't the first person to have that idea eeeeeuw watch your feet. If you had to work, or walk to the spring, for each gallon of water, you wouldn't be shitting in it.

Park that thought and get on your bike? MeFi flagged the inauguration of a new ultra endurance race GBDuro2019 in the UK (from Land's End to John O'Groats, of course). It's with bicycles and the rules of engagement is that you have to carry all your kit, and all your food with you. You can nip onto the shops and tap your cred-card for a Mars bar or a Cornish pasty, but you can't have your partner drive ahead with the 4x4 and have a hot hip-bath and a gin&tonic ready when you breast the top of Carter Bar. Nor can you stop off in a ***** hotel; if you don't plan to do a 600km stage in one almighty session then you're expected to sack out until first light in a bivvy-bag. "Riders should ride in the spirit of self-reliance and equal opportunity." and "There are no entry fees and no prizes. There are no officiators, no marshals, no ride leaders, no rescue services. There is no support".  Call me judgemental but if, on the Camino, you send your rucksack ahead of you by van (and you can, there's no longer a gap in that market) then that's not in the spirit of self-reliance and equal opportunity. 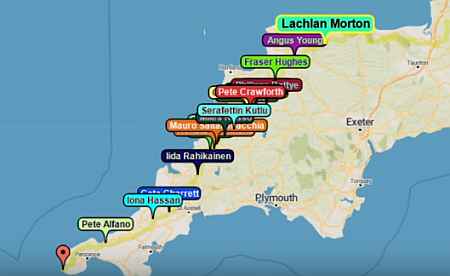 When I walked up the coast of Portugal in 1989 (heck! that's nearly 30 years ago), I was entirely on my own and on my own resources. There were no direction arrows, no hostels, no cell-phones, no GPS. The only reason it was possible at all at all was because the navigation was delimited by the sea. If I drifted too far East I got wet feet. GBDuro2019, for all its self-reliance is very much a child of the Age of WiFi - everyone has a GPS transponder and the route map is similarly on the GPS cloud. So you have to phone-check yourself all the time lest the true-route bifurcates from the you-route. It's nifty and graphic: like the still [above] from the documentary on this year's trek.  Because it's on the cloud, your Beloved or your fan-base can check your progress 60/60/24/7. The organisers a shadowy body called The Racing Collective [Гоночный Коллектив ?] request and require participants to tweet time- and place-stamped photos of their progress. It's not like when Zatopek won his marathon in 1952. 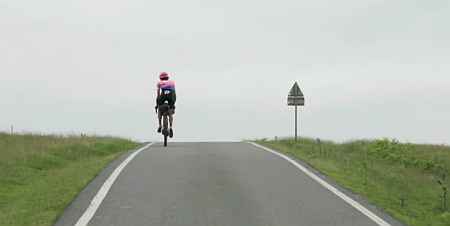 If Lachlan Morton looks lonely or like he's left everyone behind, it's because he has:

2,000km in 111.75 hours! Blimey!? That's as inspiring as the Appalachian Trail trials of Scott Jurek; the Iditarod dogs in Alaska; The Tarahumara in Mexico; the Barkley Marathons in the Tennessee wilderness. But let's get back down with the dirty: if you are off road and on your own and need a crap; what then? Well, The Kollectiv gets really exercised about this because soiling the route is showing contempt to those who come after you . . . and for the pristine natural landscape through which the riders are privileged to cycle:
I've said enough, back to the filum!
Posted by BobTheScientist at 07:21