For services to science

In 2006, when Charles J. Haughey, former Taoiseach and perpetual chancer, finally threw in the towel and left politics under a cloud of his own shenanigans, he added a bit of culture to the Dáil record by quoting Othello "I have done the State some service; they know't. No more of that". Any number of clever cloggses, who did better than Haughey on Leaving Cert English but less well in amassing a fortune, noted the omission of the rest of Othello's self-assessment as a man who was "perplexed in the extreme", who had "traduced the State" and was "richer than all his tribe". Haughey is widely condemned for getting himself  "richer than all his tribe" by people who benefitted from his determination to drag Ireland out of the 80s depression and start roaring like a Celtic Tiger. Why, I myself got into a mighty feed of Guinness and oysters when the Great Man officially opened IMMA, the Irish Museum of Modern Art, in May 1991. That bold expression of a bright and well-fed future could be marked as the birth of the Tiger. That could be characterised by a Shagsperian paraphrase: The Tiger was but a walking shadow, a rich financier that struts and frets his hour upon the stage and then is heard no more: it is a tale told by an idiot, full of bling and feasting, signifying nothing.

Here is a conundrum for governments and other institutions: how to pay people who have done the State some service in a way that neither offends the recipient nor costs the State some money. Both my father and my brother threw in their lot with the United Kingdom, despite having exactly the same King's County roots as me.  In my father's case the shift commenced during the Free State years when the borderline between Ireland and Britain was blurrier. Both of them did better for themselves serving British institutions - the Royal Navy and the BBC respectively - than they would have done in the Naval Service an tSeirbhís Chabhlaigh or RTE. My Dad drove far bigger ships than Ireland can afford, for example. At about the same age, the state recognised their very different contributions with exactly the same medal - CBE - giving them parity of esteem with Anthony "EBV" Epstein but one step below Jocelyn "DBE" Bell Burnell . The Brother's workmates now call him The Commander, by way of saying that only a stuffed shirt would take these things too seriously.

When I was a tot in the 1960s, there was series of ads inviting you to "award yourself the CDM". Mother just about manages to close a jam-packed suitcase - then child brings teddy bear. She awards herself the CDM for closing it. Voiceover: Have you been sent packing today? Award yourself the CDM!. Things didn't improve with a noisier jazzier ads for the same product in the 70s. But chaps had longer hair in those post-National Service days too. 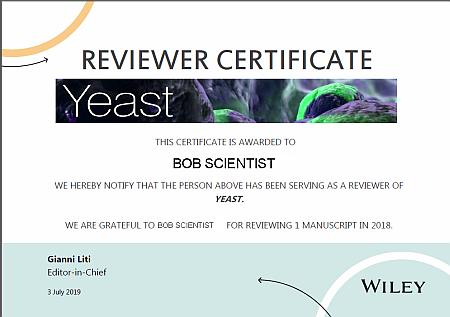 The Big Five in academic publishing are King Elsevier followed by Wiley; Springer Nature; Taylor Francis; and Sage.  Their business model is to make authors pay page charges and libraries pay fabulous subscription rates for must have journals often bundled with other journals that would not be sustainable on their own merits. Nobody knows how much Harvard, Heidelberg or my own The Institute is required to pay because the deal is signed on non-disclosure confidential terms. Last year, a former boss [smartest bloke in the room in most rooms] asked me to review a paper for Yeast because, in the Venn diagram, the intersect between my niche expertise and what Yeast would entertain publishing was that close to the null set. I had a great time on the task, dredging up what was second nature to me 20 years ago, reanalysing their data and recommending a number of ways the paper could be streamlined and tightened up. I did a good job, and put in far more work than the other referee. But none of us got paid a cent for the work which is essential for the academic (and by extension commercial) credibility of the contents of the journal. 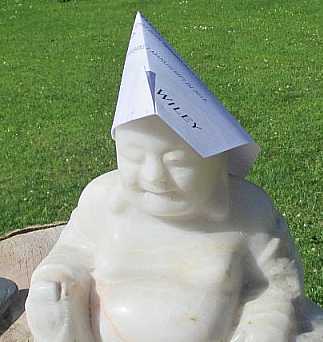 You're richer as a Wiley shareholder doing bugger-all for the process than people [authors, editors and referees] who actually do work. But it was fun for me, because it happens rarely and I knew I could make a positive contribution Pour La Mérite For Science . . . which I'm not in for the money. This week, exactly a year later, I got my CBV - Certificate for the Bovine Voluntariat [above]. Sometimes, you see in a paper's Acknowledgements "Thanks are due to an anonymous referee who made constructive comments, improved the Inglesi and made it a better paper" not in this case, however. I am not ungrateful, so I wrote back to the robot who sent me the Cert: Thank you so much, I printed it out at A3 and folded it into a hat: really useful to help survive the current heatwave. With care, recipients can ensure that WILEY is displayed at a jaunty angle over the left eyebrow. If we're going to whore ourselves out for Multinationals we may as well wear the cap that fits.
Posted by BobTheScientist at 07:27