My home was full of Buddhists on Saturday morning, so I lit out for the Waterford coast to do some meditative scavenging. It was not raining, not too hot: perfick and the tide was bottoming out  as I passed Annestown. Low tide means being able to dance across the rocks of the headland and walk along the beach, totally alone, beneath the towering cliffs of Woodstown [no, not that Woodstown] and Whitefields. I don't do this for the good of my health; but rather to see if I can pick up something for free. WysiwIg: what you see [L] is what I got.  For reasons that may become apparent, I weighed the 4 buoys: which totalled 44oz = 1.25kg.  The tennis-ball, the driftwood, the rope and the large white light plastic ball in the net are a bonus.

There's all sorts of crud [plastic bottles, flip-flop soles, unmatched kids' Crocs, pieces of cord too short to keep] I could be picking up from the foreshore and tide-line, but don't. I'm with my refusnik pal, Wallace Arthur, on that. Picking a bagful of the detritus of littering strangers is not my idea of fun, nor is it my idea of efficient. I'm a fish-box, rope & buoy boy myself: I can get those back into circulation for a second life about the farrrm. Others have more appetite for cleaning up rubbish than Wallace and me. For example, Steven Moody is a plogger, adding clean-up to his daily jog.

Boyan Slat had more ambitious plastic dreams and raised $40,000,000 VC to scan the oceanic garbage patches . . . and pick it up. Slat runs his Stichting as a charity registered in the Netherlands, which requires quite high standards of accounting and transparency. But reports from the pilot study at the end of last year found that Wilson, The Ocean Cleanup's solar-powered plooper scooper was allowing the prey to drift from its clutches before getting bagged. Back to the drawing board lads!

Because of my interest in ocean clean-up and periodic checks on young Boyan's progress, I am become "Mark" for youtube Ads from another ocean-meet-plastic venture called 4ocean. They wear blue t-shirts (or fetching dudey chest-wigs for the sun-shots) and mostly seem to scour the coast-line in plastic pickup meitheals. In Florida this work is carried out by The Voluntariat but in Haiti and Bali, local lads are given pale blue t-shirts and paid to clean the beaches. In contrast to The Ocean Cleanup, 4ocean is For Profit. The company pay Balian fisherfolk by the pound to pull plastic out of the sea, because sure-as-heck they weren't catching much fish. The business model is that they recycle old glass bottles into beads and old plastic bottles into PET braid and combine both into bracelets which you-the-punter buy for $20 . . . each.  I hate it when advertisers state the obvious about the product, as if the reader was either 4 years old or mentally deficient. Porridge oats as "fat free"; hamburger as "gluten-free" that sort of nonsense. 4ocean assert: Hey surfer dudez, these 4ocean bracelets are Unisex and Waterproof. In my BLT handbook ⚥ means bisexual rather than unisex but we'll let that pass. As soon as I saw that my bracelet would cost an eye-watering >!$20!<, I closed the window and moved on. The puff is that your $20 pays a well-tanned but indigent person at the rate of 1lb = 450g / bracelet. 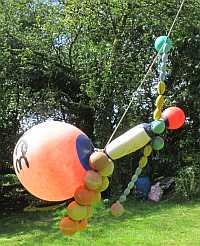 Can that be right? $20 will buy you a bottle of finest Californian Chardonnay or a pound of quality French cheese. If you send $20 to 4ocean their Haitian workers will take a small bagful of plastic crud from the ocean, $20 is 100 minutes of work at California minimum wage [$12/hr]. If you live near the coast, could go to the nearest beach and do a lot more in 100 mins than pick 1lb of plastic off the tideline - like cut the middleman out. My small but perfectly formed haul pictured at the top of the page is worth $50!! in 4ocean credits.  My Are we Having Fun Yet? swinger b[u]oy [R right on!] is, by the same accounting, worth $550 for the planet.

Is the whole bracelet thing a scam? [12 miuntes] tl;dr, it depends what you mean by scam. IsItBulshit?  That has some less forgiving analysis of 4ocean and the personal experience of picking up 17(!) lb of beach plastic in an hour. Forbes is not so much forgiving as adulatory about the venture and says that +1 million bracelets have been shifted. $20 million dollars will buy a lot of pale blue t-shirts; top-quality editing on the promo vids; hours of intrusive youtube ads . . . and still leave a lot for The Founders. Because it's for profit, there is no obligation to submit a breakdown of costs to you and me and a well-paid accountant will keep as much from the IRS as is legal.
Posted by BobTheScientist at 07:19