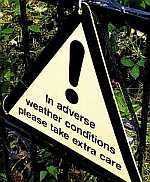 While we were looking after Generation +2 [Gdau.I & Gdau.II] in Bath last week, I escaped to visit Generation -1 [m'Mother] for lunch. It turns out that there is a direct pootle-pootle train from Gloucester to Weymouth via Bristol and Bath and a clatter of towns and villages along the way. Several of the stops, including Chetnole Halt (my mother's gaff), are Request Only. That means you have to tell the train conductor if on the train or wave your hat, shooting-stick or handkerchief at the train driver if on the platform. It would all be more internally consistent if the engine ran on steam <choot choot> and the kids on the train looked like Alice O'Wonderland or The Railway Children. Because England is not, quite yet, a Fascist state, the trains don't run on time, so I had a long time on the platform at Chetnole Halt and read all the information posters twice. Including this wholly unnecessary advice " In adverse weather conditions please take extra care ". Not Dreadnought Me: when the stairs are really icy, I can get to the platform faster by sliding past the competition.

Consistency being the hobgoblin of small minds aka bureaucrats, the little bus-shelter hanging off the back of the platform has a portable wheel-chair ramp locked against the inside wall. I am guessing the Transport Inclusivity Regulations 200X dictate that All Stations must have a wheel-chair ramp. Any physically disabled or infirm person wishing to alight can thus do so without the help of any other passengers. It just requires a train operative to lug a heavy steel ramp to the requisite door. The irony of having this 'solution' at Chetnole Halt is that the only way off the platform is along a boggy gravel path and up a steep flight of 20+ steps to the road. Incommmming patrons / travellers / customers with disability are warned off at the top of the steps and advised to try for access at Yetminster 5 km further up the line. If you have arrived from Gloucester, Bath Spa Castle Cary or Yeovil Pen Mill by train, then you'll be marooned on a narrow concrete island 3m x 150m until the next train comes through.

In 1961 The Transport Minister appointed Dr Richard Beeching as chairman of the British Railways Board. Beeching commissioned and published a report The Reshaping of British Railways that recommended the closure of 6,000km of rail track and more than 2,000 stations that couldn't pay their way even with a hefty government subsidy. There were train services running in 1960 where there were often more railway staff aboard than fare paying passengers. This was 20 years before 'everybody' owned a car and a far greater proportion of people were reliant on public transport to get to work or get to the shops. I was the only person who a) got off the down train at that station and a few hours later boarded the up train. Given that Chetnole Halt survived the Beeching holocaust of steel, the closed stations must have been very dusty indeed. One of the advantages of Great Western Railways being persistently late is that you get to see some of the wild life which uses the corridor of an under-used rail right-of-way as a habitat far from the madding crowd [Thos. Hardy, local author, reference] of cars and buses. Like this adult roe deer Capreolus capreolus [R] picking its way delicately across the rails from one nirvana of browsable bushes to the greener one on the other side of the tracks. Eventually, the train arrived. Just after Bruton the conductor came round handing out 'free' 330ml bottles of GWR water to the passengers; some of whom were wilting in the heat.  The train was 22 minutes behind schedule when I got off in Bath. One announcement claimed that the the train was delayed because the heat was melting the tracks. I tell ya, lads, 'tis The End of Days.
Posted by BobTheScientist at 07:40