For the last 20+ years I have had a file on all my successive work computers called Notes to Self. It contains everything which I've learned how to do, in case I need that fix again. I guess, before about 1998, I could rely on my "mind" to retain these useful skills-and-facts. Not any more, lads. Because these files exist, I can trawl back through them and marvel at what I could do back then. Tall buildings to leap? No problem in 2002. But then again, I don't think I'm ever again going to make graphic displays of gene expression across sections of  the human genome. It would be mildly embarrassing to show my NotesToSelf to the younger, fitter, smarter, people with whom I worked at the time: they would be aghast at my ignorance.

Laying yourself bare warts-and-all is the commonality between my dry academic aide-memoire and the blistering raw exposure in Emilie Pine's Notes To Self [2018 €9.99] [reviewed] a book of essays which documents where she came from and how far she clawed herself up the precipices of life to "Success" as a lecturer in UCD. You can read a segment about the anorexic horrors she inflicted on her teenage self. If that is too much for your lily-livered soul, then don't read the rest of the book - you'll have nightmares for the rest of the year. Calling eating disorders 'self-inflicted' is not to suggest that it is easy, or even possible, for the perp to pull herself [herself? - there is a slight excess of the disorder in F vs M] up from the puke bucket and start eating chicken-wings like the rest of us. We all live in a compromise world buffeted by competing needs, desires and constraints and anorexia becomes a solution to this booming buzzing confusion for some people at some times in their lives.

More or less at the same teenage time, Ms Pine was living in London under the "care" of her single-parenting mother. They had been abandonned by Richard Pine (author, lecturer, media apparatchik and alcoholic) shortly after the birth of his second daughter. Emilie ran wild in London, pretending she was a loose woman in the drugs, booze and rock scene when she was actually a girl who should have been either doing her school homework or getting some sleep. A key problem seems to have been where to stash her school uniform, so she could look outwardly normal for English classes in daylight. A lot of her pals died but she managed to teeter through the hazards of men, alcoholic benders (doubtless occasionally at exactly the same time as her father was blotto in Dublin), and self-esteem. At some time, not quite too late, she realised that she was smarter than all that and relished the escape-from-grot and flying-to-heaven of reading and writing. She is now a lecturer in film and drama in UCD. I'm sure she brings something interesting to the table with her students, having lived a far wilder peri-adult life than them. Having experienced so much crap as a young woman, she has a well-honed crap-detector and I don't imagine that she lets the students off with second best.

To her shame, but because she is in the normal range among adult women, she lets men off with a lot. When fellow male academics let slip a gross or slight or implicit sexist comment, she doesn't always call them up on it. Because she isn't cruel enough to humiliate grown men in public; because life is too short to deal with that shit every time it happens; because oftentimes she only twigs that she has been disrespected as an esprit d'escalier after she and he have left the room. That's the problem with the patriarchy, they infect everyone about them with their sense of entitlement. The ideas people have in their heads are not crafted entirely inside there between the ears, they are frequently bounced in from outside and modified so they make some sort of sense and have some sort on internal consistency. Because men bray louder and oftener, they and their ideas become the background certainty of common discourse. It takes a strong woman to cut through this to think and do the right thing by/for all people.

There's one telling current culture reference about the all-areas reach of the Patriarchy. She goes to a feminist theatre performance where all the dancers on stage are completely naked. As well at the lively movement and the femessage, Dr Pine notes that none of the women have left their pubic hair as evolution intended it to be. All of them have tweaked or tidied or shaved the whole area bare. Allowing them the benefit of the doubt - I do it for me - is countered with a rather tetchy yeah right. I don't have a wide experience of pubic hair these days but I gather that this depilation is A Thing and indeed an industry nowadays - even for blokes! What's all that about? Is it not a little peculiar to have a culture that is really exercised about paedophilia [Bad] which at the same time mandates to removal of a key attribute of sexual adulthood? Just a thought.

As an academic Dr Pine has worked twice as hard to get half as far as her male contemporaries; but that's normal for women in college or industry or any institution. She certainly seems to have played the game to the rules written by the university administration: if they expect external funding, Dr Pine secures grants; if they require presentations abroad, Dr Pine eats jet-lag for breakfast. She was well into her 30s before biological imperatives plooshed above the surface of her frenetic academic and ambitious life. She went through several harrowing years trying to fall pregnant when she was on the edge of menopause. I don't imagine that she was easy to love or live with during that journey. But motherhood didn't happen and the chapter where this is all laid out on the gynaecological couch is resolved in a realisation that life is not about just one thing or even one thing at a time. About half of the women I really care about have been on a similar journey. 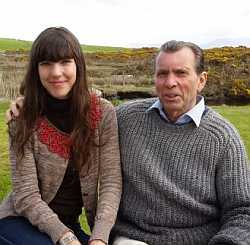 Another resonant chapter deals with her father's near death experience, in a third world hospital in Corfu. It's Emilie's experience too because she and her younger sister fly out to Greece to deal with the crisis - basically liver failure from four decades of alcoholic excess - which includes mopping up all the bodily fluids that spew from the paternal orifices. Note to self: bring surgical gloves. Eventually the women, with grudging help from an insanely over-stretched hospital staff, get the old man stabilised and flown back to Ireland. That was in 2013, and he's off the booze now and functioning better. At no time did he consider apologising to his daughters for following a Me life for all the years when the girls could have used his support - financial, emotional and social. Then again, what kills not fattens, and Emilie Pine might be a less interesting and useful person of she's followed the comfortable middle-class Dublin Arts life that might have been.
Posted by BobTheScientist at 08:09