I'm still trying to figure out what The Point is (hmmm 42?)but I can answer the question without the comma
Q: "What's the Point Bob?"
A: "It's an exclave, silly!"
Point Roberts is a tiny fragment of the 'contiguous' 48 states that is no more contiguous than Hawaii or Alaska, although it is part of Washington state in the same way and for the same reasons as the San Juan Islands are. Point Roberts is a consequence of the Oregon Treaty, signed by Britain and the USA on this day 15 June 1846. Before then, the Pacific Coast was a distant and sparsely inhabited region of interest primarily to the Tlingit and Chinook and other First Nations who impressed each other with totem-poles [R] and potlatches. Mexico extended Northwards and incorporated all of California and Alaska was still under Russian jurisdiction until purchased for $7.2million by US Secretary of State William Seward in 1867.  The bit between was known to the Yankees as Oregon Territory while the Brits called it Columbia District - not to be confused with the District of Columbia in the other Washington. It was unclear who had sovereignty because the 1818 Treaty between UK and USA had established the 49th parallel of latitude as the border between The Lake of The Woods, where Ontario, Manitoba and Minnesota meet, and the "Stony Mountains" far to the West. On rather frankly Scarlett grounds the land beyond the Rockies was set up as a condomium/free-for-all for ten years. A lot happened between 1818 and 1846 and American settlers, traders, trappers and hunters were coming out West in increasing numbers. There was a fair bit of chest-thumping bluster under the slogan Fifty-four Forty or Fight which would give the US the whole disputed territory up to the Russian zone to the Republic. Cooler heads in Washington DC had another war - against Mexico - on their hands and didn't have the bottle to take on the Brits (again!) as well. 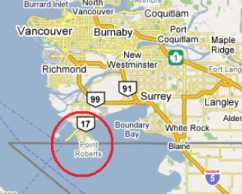 The Oregon Treaty settled everything by continuing the 49th parallel to the sea but also agreeing that the whole of Vancouver Island was assigned to Britain - "Canada" didn't exist yet. Point Roberts is the Southernmost end of a peninsula that dips below latitude 49 but is still part of the mainland - it's definitely not part of Vancouver Island, anyway!  So according to the letter of the Oregon Treaty Point Roberts is not outer suburban Vancouver City but a part of Whatcom County, Washington State, USA.  The locals [N = ~1300] call it affectionately Point Bob and bus their high-school kids all the way up into Canada and down to the County High School in Blaine on the far side of Boundary Bay, it takes 40 minutes. No worse than the time spent on school buses in parts of rural Ireland.  Point Bob is accordingly about as interesting as Bob Island, which is to say: not very.
Posted by BobTheScientist at 06:02