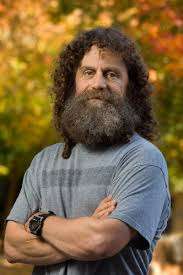 A couple of months ago, my friend P in Gt Boston told me I had to read Behave: The Biology of Humans at Our Best and Worst,” by Robert M. Sapolsky. [shown right: clearly a primate, quite possibly an alpha-male] She added that I'd met Sapolsky in the '80s when we are all in grad school together: he had been dating one of the women from the B.U. Biology eco-evo floor where P and I met. I didn't remember any of that, but I can obey orders and the Irish Library Service [remember them?] found the only copy in the country and delivered it to me for collection in Tramore. It's a pity it never got published as a talking book because I would have finished it in a couple of weeks of commuting [remember that?]. As it was, it  took me a couple of months to soldier on to the end: it's a heck of a book with 700 big pages and weighing 1.14kg - you could do damage if you fall asleep reading it in bed. With my two-week event horizon, I couldn't remember the first chapters when I got to the meat [what people do to each other, much of it unkind] at the end.

Since Grad School Sapolsky has pursued two barely unrelated fields in parallel for about 30 years as a research scientist - every summer he'd put on his bush-hat and travel to East Africa to record the antics of Baboons Papio cynocephalus;  the rest of the year he wore a neuroendocrinologist pointy hat (presumably with electrodes attached) in and around Stanford U. He's read his field notes and his back-catalog of papers and those of his pals, rivals and collaborators and written this mighty explicitly didactic brick book. "explicitly didactic" means Sapolsky can get a little school-marmish about the neurological details.
Important brain bits of which you may have heard nothing [spelling test later, kids]: PFC is the pre-frontal cortex and some of its sub-bits are dlPFC vlPFC vmPFC ; amygdala; hippocampus; hypothalamus; fusiform gyrus; insula; dorsal anterior cingulate cortex DACC; paraventricular nucleus (of the thalamus).
You lost? Me too, folks. Sapolsky seems to imagine that I will recall all these grey matter bits'n'bobs, and what they are responsible for, when they come up in later chapters about baboons picking nits off each other or college students being tested for implicit racism. You can manage without the anatomical details but if you start skipping acronym-fattened paragraphs then you'll really race through the book and po[o]p out the back-end without doing much digestion.

There's a lot in there and I won't attempt to summarise Proust in 2 minutes like Monty Python but I may well lift a couple of interesting views of the human condition when I'm short of copy. I'd certainly like to bulk out my, now embarrassingly superficial, executive summary of the squeeze hormones vasopressin and oxytocin.
Here's the great man talking about his stuff at the California Academy of Science. Wot! that's more than an hour long, Bob. Stop whining, I stuck with him for two months. Indeed, The Beloved and I made a stay-at-home date a couple of weeks ago and that was our movie. Turns out we've met Sapolsky before talking about pandemics [ aha, fooled ya: thought we could get through a blob without Coronarama? nope] with some prescience.
Posted by BobTheScientist at 07:32