<warning>If you're going to have a fit of the vapours reading about
sex, lice or the clap you shd stop reading after the first paragraph</warning>

The latest addition to the humanstock on our farrrrm is young Bolivar, a very handy chap from Venezuela who is wwoofing for a few weeks to improve his Inglés.  WWOOFing?  Working Weekends On Organic Farms - not necessarily organic or weekend; usually farms and mostly working. The Darwinday Storm of 2014 did damage to our trusty polytunnel; notably whacking the doors off their hinges. It has taken us until now to think about repairing them. The sheep also needed new troughs for the muesli that we supply during the months when there is no grass growing. The last pair of troughs, purchased 4-5 years ago have been out in the wet too long, too often and are 'delicate'. If you've ever watched sheep in a feeding frenzy, you'll know that 'delicate' carpentry is not fit for purpose anywhere near them. ANNYway, over a few days, reusing as much wood as possible, Bolivar has made 4 light-weight door frames from 3x2 timbers with beautiful mitred corners and elegant cross-bracing. He has also built two 2.4m troughs that would withstand a feeding frenzy of rhinos: either Ceratotherium simum or Diceros bicornis or indeed both.

The question arose about how to prevent the new wood rotting away and I found a tin of Ronseal Garden Gate and Fence Preservative in one of the sheds. That could be slapped on the doors without worry but, if it was designed to kill fungi and insects, might it not also do damage to the sheep as they licked the last crumbs of meal from the cracks? The interweb to the rescue!  Accirduing to the label, RGGFP is a mixture of Permethrin and Propiconazole.  The latter is a triazole based system anti-fungal agent which inhibits an essential enzyme in fungal metabolism, so it is aka demethylase inhibitor or DMI. [-ase for enzyme] So that deals with fungi, although it also has some inhibitory effect on the feeding of some beetles.

Permethrin OTOH [structure L] is the boy for the arthropods, and will kill not only insects but ticks and mites, which are more closely related to spiders.  We decided to operate on the precautionary principal and only paint the outside and underside of the troughs and give two generous coats of the stuff for all the exposed surfaces of the door. We've met ticks before, both as the carriers of a fabulous range of human diseases and sucking moose Alces alces dry in Canada. 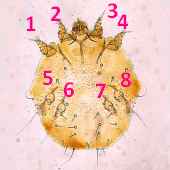 But I knew close to nothing about mites, their distant relative. A couple of days after reading the ingredients off the tin of wood-preservative, I was reading, with some urgency about mites. In particular I was reading about the itch mite Sarcoptes scabiei [L, not to scale!! it's only 0.5mm across: I've numbered the legs to show its fundamental spideriness], the cause of a distressing non-fatal infestation called scabies. Scabies spreads through prisons, refugee camps and homeless shelters because the sheets (if any) and the blankets (if lucky) don't get washed enough and get shared out of necessity. The mite is quite delicate and cannot survive for more than a tuthree days absent from a warm human body to feed off. Leaving the blankets on the floor for a few days is sufficient to kill the mites but you can also speed things up with a good hot wash in the bathtub or, if you have one, a washing machine. You can't give your child a scalding wash in the bathtub without killing it along with the mites . . . so the treatment of choice is Permethrin.  If you slather a sufficiently concentrated solution of Permethrin on the the child's body before bed, all the mites should be dead in the morning; do it again in a week's time to be sure to be sure. It's a peculiar demarcation that mites are found only on the body, in contrast to lice Pediculus capitis which only inhabit the head.  And don't even think about crabs Pthyrus pubis, they live down there.

You'd have to be quite unlucky if you caught scabies by, say, picking up the blankets to wash them. It requires prolonged skin to skin contact for direct transmission without using blankets as a vector. The itching results because the mites actually burrow through the top layer of skin like moles in a pasture. Or indeed like the Guinea Worm Dracunculus medinensis. So I suppose it takes time to leave one person's epidermis and migrate to another's. Prolonged skin-to-skin contact is symptomatic of sex, so many epidemiologists count scabies among the STIs. scabies is both easier to spell and easier to treat than, say, gonorrhoea.

Clean bedding, cleaned child and you're back to the status quo ante. Except that you're not quite as you were before: your immune system has been primed to act against the mites and the next time you are presented with t'buggers, you'll be itching the next day; whereas it took 4-5 days from first infection before the dreadful, infuriating itch manifested itself.  So it's another example of our immune system being the primary cause of the discomfort rather than the pathogen itself.  but relax, I am certain sure that you can't catch scabies from reading about it.
Posted by BobTheScientist at 07:19