We hates 'em, my preciousss.
This is the second year when I've been asked to mentor post-graduate students in the MSc in Pharmacy Regulatory Affairs. They are required to write a thesis on some relevant independent research in that field. I have [been] adopted [by] one of my last year's mentees. A year ago, I wrote "Sounds like an asset to me; I hope he doesn't go straight back to India with his qual." He is hanging in there - or rather here - trying to find work in the pharmaceutical arena where he can use his talents (tenacity, happy disposition, experience in research) to earn an honest crust. His visa has been extended for a year after graduation, so he has till November to find a billet.

Last week he sent me a plaintive e-mail to say that he was really down in the dumps having received an avalanche of rejection slips the day before. Accordingly I whisked him away from his home on the edge of town, and took him down river to the fancy garden centre for tea and buns . . . and to brace up his self-esteem. He tucked in to a wedge of luminous purple cheese-cake [with extra cream!] and a hot chocolate while I gave him advice about how to network his way to work rather than uploading his CV to numerous recruitment web-sites: Doesn't make you stand out, mate; at least partly because it costs nothing. I also tried a bit of Socratic to get him to think about what he really wanted to do - so he wouldn't, from desperation, take any cruddy job.

Turns out that his Tamil Nadu Network TNN is almost begging him to return home. But his ambition is to a) get work and settle in Ireland b) bring his parents to live with him when his Dad retires in 2024. We fell to talking about Indian society and politics, He is clearly a TNexiteer in his heart and wants much more autonomy for his State and less interference from Brussels Delhi. 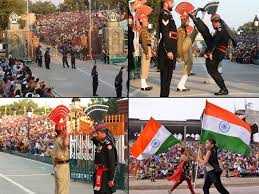 But two years ago, in his early 20s, my man went on a month-long organised tour of India: starting from home in Tamil Nadu and taking a train all the way to Kashmir and the Himalaya and then working his way down through the sub-continent marvelling at the wonders of his absurdly wonderfully disparate country. An almost obligatory stop on such a jaunt is the Wagah Border Crossing [Palin's commentary] between India and Pakistan. Here, the fittest, smartest, and handsomest soldiers in the armies of the two countries show how clearly we are descended from apes and share ancestry with bantam cocks: strut, puff, stamp, glower, primp. And the crowd roars! My boy among them, reflecting on how the Indians far outnumbered the Pakistanis on the occasion he visited and how pathetic the little crowd of crescent-flag wavers looked.

I invite you to reflect on your own position in similar circumstances. The definition of The Other seems to be almost ubiquitous in human cultures. How narrowly we define Us is, for me, a marker for inclusiveness and indeed humanity. I am a European. I've never been comfortable about being part of a nation state. The idea of rooting for 'my' county in a hurling final is completely alien. But if I look critically at my smug credentials for welcoming enthusiastic, qualified pharmacists from Tamil Nadu (and all those gynaecologists from Syria), then I have to admit I feel edgy about people from the occupied six counties. Not individually, mind, some of my best friends are Nordies; but The Flag-wagging Collective. It seems timely to bring this up <blooooargh> as we move into the 8th hour of an EU without UK.
Posted by BobTheScientist at 07:30