The Lady of Selenium

It's been a while since I wrote a brief biography of women in science, of which I've written Heinz = 57 varieties.  Those essays don't really serve any cosmic purpose but together make 30,000 words designed to inspire my grand-daughters [or or any young woman] to think about a life in science.  Now that's important!  We need more women in science, insofar as they are different from blokes, their ways-of-seeing and ways-of-doing are valuable because diversity is valuable. This mini-blob project is fun for me because women-in-science, of whom I've never heard, keep sailing in over the horizon demanding attention.

I've written about selenium before. That element is in the same column of the periodic table as oxygen and sulphur and so shares many of the chemical properties of those elements. We give our sheep access to a bucket of mineral lick mainly because our section of the landscape is known to be deficient in selenium. The beasts don't need much but they need enough, making it a classic case of physiological homeostasis. The range is worryingly narrow: for goats Capra hircus at least 0.2 ppm is required and 3 ppm is the lower level of toxicity. These are the safe limits when measuring soil concentration; 1ppm = 1 mg per kg. Now it is a well known fact that neither sheep nor goats eat soil; they eat plants and some plants are better than others at tolerating and accumulating selenium. Farmers are warned about locoweed Astragulus spp. because a) those plants are indicators of higher levels of selenium and b) they give livestock "the blind staggers" as the selenium impairs both vision and muscle coordination. Confusingly, some of the symptoms of selenium toxicity match those of selenium deficiency so it's difficult without chemical analysis to get things all Goldiloxian and Just Right. 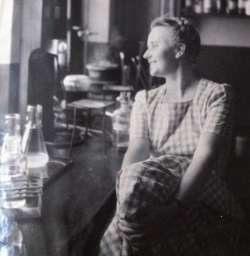 We owe our knowledge about the essential nature of selenium to some careful experiments in the lab carried out by Jane Pinsent [biog] in the Lister Institute in London. She [L pictured in the Lister in the 1940s, photo courtesy of Ursula Gibson] got her PhD there in 1949 and showed that selenium was essential to the function of the enzyme [yest] formate dehydrogenase in Escherichia coli. Not too much, mind, just a whiff or a soupçon was required. It must have been hard to prove that there was no selenium present in the control medium because of the minute quantities involved. Dr Pinsent had no idea about the mechanism whereby selenium worked its magic but was able in 1954 to prove the essential nature of its contribution. For good measure, she also proved that the element molybdenum was required for formate dehydrogenase to work. Before her work selenium was only known to be toxic, afterwards its status was known to be a matter of balance. Between getting her PhD and publishing her seminal work, Pinsent married Quentin Gibson, a Lecturer in Physiology at U Sheffield, and changed her surname.

To put this into historical context you must appreciate that Crick and Watson had deduced the structure of DNA only in the previous year 1953. It wasn't until 1960 that Jacob and Monod worked out that genes frequently work as operons to produce the enzymes necessary to carry out a given biochemical task. In 1961 Nirenberg and Matthaei made the first step in deciphering the genetic code. In some ways, Pinsent/Gibson's work was one of the last throws of traditional microbiological research before the relentless rise and rise of molecular biology. It turns out that formate dehydrogenase H is one of the enzymes that incorporates the minority-weird amino acid selenocysteine Sec U [bloboprev] into its structure at position 140 - CCARVUHGPSV - in the protein chain. Selenocysteine wasn't discovered until 20 years after Pinsent's proof that Se was essential - in 1974 by Thressa Stadtman. Without sufficient selenium, that enzyme doesn't carry out its function. And it turns out that the molybdenum binds as a co-factor attached to that key selenocysteine residue.

In the 1960s, the Gibsons emigrated to the USA and she worked in U.Penn and Cornell. As well as an active career in teaching and research she found the head-space to raise 4 children; another example of women who refused to treat children vs career as an either/or choice, you can have it all if you are prepared to work super-hard. Super-hard on the teaching that's for sure. For years she taught a laboratory course in Cell Biology which could have fossilised into the same-old same-old. On the contrary, Prof Gibson made it a point of principle to devise, develop and test new experiments each Summer for the course in the Fall. That must have been part of the reason why the course was so popular and such a great didactic exercise. Running the same old tests year after year quickly transmits a sense of boredom and routine to the students. Putting new ideas to the test helps keep everyone awake: there is a buzz [?only?] if you don't know what the answer is.

At the same time she started work on cyanobacteria the photosynthetic microbes that fill the oceans. I was writing about them just last October in my trib to Penny Chisholm. The Gibsons shifted to Woods Hole Oceanographic Institute WHOI in South Massachusetts for a succession of summers. She named and characterised a gliding flexing green sulphur bacteria called Chloroherpeton thalassium found in some off-shore mud. That gave her the creds to collaborate with Carl Woese in his classic 1980 Science paper bringing molecular sequence data to bear bear on the phylogenetic relationships among bacteria. In the same year, Woese Gibson, and Fox got out a Nature paper putting manners and data on the idea of horizontal transfer of genetic information among bacteria. Even in those less crowded days, to land a Science & Nature 'double' in one calendar year was a rare feat. Having made a major contribution to our understanding of the biological world during the last years of classical microbiology, Jane Gibson was thus at the forefront of the molecular sequence era of bioinformatic analysis.  A woman who re-invented herself.

Bonnets off! for sure.
More Women in Science
Posted by BobTheScientist at 06:59