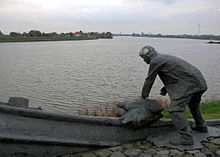 Een dubbeltje op zijn kant [R] is an sculpture / installation on a section of the dyke near Nieuwekerk aan den IJssel in the Netherlands. A dubbeltje is 10c in old money, equal to 2 stuivers. And the phrase means "a close run thing" or "a lucky escape".  When the elements rage and your life and livelihood is threaten with extinction you can run for the hills or pray like the soldiers on the Sea Horse . . . or, like the plain people of Heimaey you can do something about it.  I suggested in the Heimaey piece that taking arms against a sea of troubles and by opposing end them is a particularly protestant solution to a poor hand of cards.  If you're reading this, you have just survived the night of 31st Jan/1st Feb.  In 1953, something like 2000 people failed to do that and a further 70,000 were so wet and cold that they had to leave their inundated homes. An Atlantic storm and a high tide caused storm surges all round the North Sea which over-topped the sea-defenses in the S Netherlands, Belgium and the East coast of England. It was waterwolf in its most aggressive and destructive power.  The biggest loss of life in the 1953 Watersnoodramp / flood-disaster was in the provinces of South Holland, Zeeland and North Brabant with several islands and polders completely inundated. It was the last big flood in Western Europe to occur with 19thC infrastructure.  The storm happened on the Saturday/Sunday night and civil servants were in bed if they weren't in water: there was no convenient way to call key personnel to duty and no system for alerting the threatened population to move to safety.  As well, the science of meteorology was poorly developed and its predictive power was limited. It didn't help that events peaked in the middle of the long winter's night.  For all the death - 30,000 head of livestock as well as the people - there were thousands of tales of heroism and sacrifice.

It could have been far worse.  The Afsluitdijk [off-shut-dam] separating the Zuiderzee and Nordzee had been recently constructed and was said, in that one night, to have paid for itself in saving the communities round the lake, including Amsterdam from damage. The Schielands Hoge Zeedijk was the main flood wall protecting the 3 million inhabitants of South Holland and North Holland. The rising floodwaters were lapping the top and sought the weakest point which started to give way. Volunteers had been hefting sandbags in the hours before dawn but the local collapse called for immediate and intelligent response to avert disaster. The mayor of the nearest substantial community, Burgemeester J.C. Vogelaar of Nieuwerkerk aan den IJssel commandeered the nearest grain barge and ordered it to put its thumb in the widening gap. Skipper Arie Evegroen deftly buried the bows of the Twee Gebroeren in one side of the dyke and the water pressure slammed the rest of the hull shut against the flood. Huzzah! That's him in the sculpture pictured above. He said afterwards that he was sure his small ship would surf straight through and into the polder behind, so he was glad to have his dinghy ready to launch.

The same storm overwhelmed the Stranaer to Larne mailboat the MV Princess Victoria. 133 died and 44 survived; as with the Sea Horse the only survivors were adult men.
Posted by BobTheScientist at 07:00