I was away in Brexitland with Dau.I this last weekend. We were there to work [doing triage on the family papers for the third double-day session] but there were tea-breaks and transit time when we had nothing more fruitful to do than catch-up. These chats were not only phatic re-assurance of our mutual respect and devotion but also involved a certain amount of rational discourse, information transfer and data processing. She is coming up for working 2 years in the Dublin Library Service and she really believes in the service part of the title: ensuring that libraries are friendly and functional for a) teenagers b) people with a better tan than me c) BLTs d) the staff - not only the desk-jockeys, but also security, cleaners, trainees. 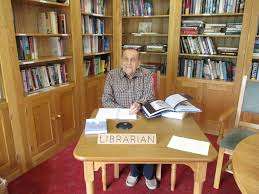 I've been 40 years working in Science but I never planned it that way my career was more a leisurely bumble than a train hurtling along the tracks to a real or imagined goal. But it seems to be different for Dau.I who has had a face in a book since before she learned to read and has had on-again off-again fantasies about growing up to be a librarian. It's peculiar and instructive to realise that there are completely different takes on A Life Well Led - none of them wrong and all of them suitable for at least some people and personalities. One of the clatter of books I am inching forward is Behave: The Biology of Humans at Our Best and Worst by Robert Sapolsky [whom we've met before: talking about pandemics which we all could with advantage re-read as COVID-19 refuses to get back in its box. Anyway one of the rhetorical riffs that Sapolsky indulges himself  in is to assert that you do well in school: to get the best possible University place: to get a position in the biggest corporation: to rake in the biggest salary for 40 years so that you can pay for the very best nursing home.

Anyway, anyway as a young librarian with ambition and reasonable prospects, she is mapping out the process of promotion and putting her advancement ducks in a row extending forward well beyond the time when Dublin will be 3 feet deep in sea-water. Getting this qualification will licence her to push thorough that innovation etc. She is also aware of who is currently elbowing their way to the top of the ladder; and how they are doing it; and whether they are casually if metaphorically stepping on other people's faces on the way up. You get to Grade 6 by serving a certain amount of time at Grade 5 and not annoying too many people. Competence in / for your new responsibilities is not always the primary criterion for promotion. Dau.I was telling a couple of anecdotes about colleagues who were snotty, snobbish, hierarchy- and status-obsessed knobs who shouldn't be put in charge of a child's tricycle let alone a branch library or Gender&Equality provision.

As she went on, I reflected that such prospective promotions should be announced to the Library Community the way that Banns are proclaimed in the parish church of three consecutive Sundays before a marriage. The purpose of Wedding Banns is to ferret out any proposed unions that involved bigamy, incest / consanguinity or other just cause or impediment why these two people should not be joined in holy matrimony. Promotion Proclamations could be done in a similar manner to allow [anonymous or otherwise] information to filter through from the community to Library HR Central before another utterly unsuitable unaccountable person UUUP is promoted beyond their levels of capability.