Like I said, we were over in England sorting out family papers last weekend which is not something that you can pay someone else to do. You can pay someone to 'clear the house' and remove the largest fraction of it straight to land-fill. There is a very limited market for second-hand side-lights, second-hand crockery and second-hand books. There is no market at all for old photographs, old letters, and old theatre programmes. Me, I'm really not interested in the details of family history, so much of the effort is put in on behalf of an, as yet unidentified, archivist or biographer who will be able to put all my childish letters in chronological order and realise [and care] that the "Lucas" of "I got poked in the eye by Lucas" is now an elderly literary agent living in London.

My Sister picked Dau.I and me up from the airport and delivered us nearby at the end of our two days riffling through the mouse-shitty papers trying efficiently to triage them into keep / share / trash. About tea-time on Sunday we were done and I was in the yard packing the sistermobile. Neighbours passed the gate for their afternoon constitutional and quipped brightly
Neighbour: "Aha, taking the family silver, I hope"
Self (ironically): "Clank, clank"
And it was a tiny bit true: over the last couple of hundred years, my middle-class professional family has gathered a modest hoard of sterling silver trinkets, including an unconscionable number of sugar tongs some sterling, mostly EPNS, for  example. Sugar tongs [like cuff-links] are an absurdly specific, wholly redundant artefact: everything you can do with tongs you can achieve with a spoon; with a spoon you can also stir the tea and eat a squidgy bit of cake. This Smaug's Hoard of Glittery was reduced when my mother's gaff was burgled in 2002. We know the exact date this occurred now because I found letters from the local police and local victim-support about the event last w/e in a very miscellaneous box of papers & cards. The sugar tongs were also depleted by a rogue house-cleaner who was gaslighting my mother; but that's another story.  Anyway, here's a nice set of spoons for when Dau.II have company - they will make short work of the gateaux de kale, crème et chocolat. 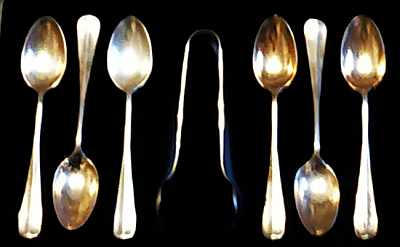 The dinky tongs are too small for any sensible amount of sugar, so I'll guess it's for rock-salt.

Some of my collateral rellies did better than others. My grandfather's sister Lily had red-golden hair in her youth which she boasted came down to her from the 'red-headed cook' Sarah Auliffe who had a long-time liaison with The Boss and gave birth to three boys including Lily's father John, the 'natural' son who inherited The Big House in King's County. Lily married a wholly unsuitable cad and bounder who abandoned her and their daughter with unseemly haste before the girl started school. When we knew her she was living in a rather grand house on the sea-front at Buddleigh Salterton in SW England. She was living with an old buffer called Walter Bell - nobody every saw a marriage cert - and they clearly had no worries about money. Abundant cash and credit sat peculiar with Lily's thrift - I'm guessing times were hard after she was abandoned by The Rotter. She would order oranges by the crate because they were cheaper but half of them would be furry before the box was finished. Eight pints of milk were delivered each day because she liked 'the top of the milk' in her cornflakes. Walter died shortly after we got to be old enough to be aware of him: he spent his last toothless months subsisting on a diet of Complan <glark!> and whiskey filtered through a capacious walrus moustache.

But he wasn't always like that. He was young once and fit. How do I know? Because he won a prize! Here is the evidence. 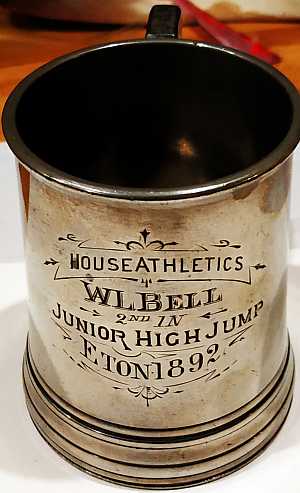 That's nice. It makes you wonder how big the 1st Prize Seniors was, let alone the School-wide prizes: probably on a scale of the Jules Rimet Trophy. If you turn the cup round, it turns out to be solid sterling silver! [evidence as footnote] . . . except for a glass bottom so you can watch your horses while swigging mulled-wine at the local Hunt. Silver bullion is currently worth $0.60 /gram and the mug weighs 335 g, so its melt value is about €200. The unfairness of life is that such valuable trinkets rain down on people who already have wodges of wonga; while poor folk continue to have no milk at all for their cornflakes.

But life isn't fair! As my father repeatedly told us when we complained about some personal injustice. It might be tolerable if the Walter Bell fortune was acquired by hard work and an entrepreneurial spirit.  At clue lies in the fact that the house in Buddleigh Salterton where Lily and Walter lived was called Woolsington. Years later, I got my first academic job in Newcastle upon Tyne. We naturally flew home to Ireland through Woolsington Airfield which was better known as Newcastle International Airport. The Bells were strong farmers with an estate of roughish pasture in Northumberland. When coal-measures were discovered under a broad swathe of Counties Durham and Northumberland, the above-ground land-owners cried Payola! and didn't ever again have to worry about hoose, murrain, blackleg, Brucellosis. glanders, lung-worm, Pasteurellosis. And don't be coming up our lane to rob us: the mug is in England and the spoons in Cork.

Dau.I and I did some superficial research on what these marks: [lion rampant; serpent's head; dagger; J.E] actually mean. They shd zero in on a country; an assay office; a year and a maker. Standing lion probably means Glasgow, although that is a long way from Eton. Help needed, please send answers on a postcard.
Posted by BobTheScientist at 07:30