The Boy went on a year-long young person's working visa to New Zealand, arriving just in time a couple of weeks before his 30th birthday in 2005. He worked briefly in recycling but spent the rest of the year in Christchurch airport checking passengers in for one of the regional airlines. It was a great life: fully-functioning knees; money in his pocket; multicultural pals;  great climate; sea on his doorstep. Christchurch was good to/for him but, to the hearty relief of his mother, he didn't fall for a Kiwi girl and settle down on the other side of the world. Four year after he left, Christchurch was hit by a 7.1 Mw earthquake and a much more damaging 6.2 Mw seismic event six months later. More damaging because many buildings were 'shook' from the previous event and also because the 22 Feb 2011 shock occurred at lunchtime when people were out and about downtown. 187 people were killed. 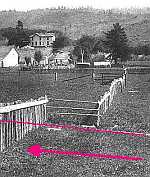 My view of earthquakes is framed by the events of  22nd April 1906 in San Francisco, partly because my grandfather was there, then. There, the ground moved; buildings were shook and fell down or bits fell off; gaslines ruptured and fires started; debris in the streets made it difficult for emergency services to get where they were needed. As everbode kno, the 'quake was caused by the relentless Northward movement of the Pacific Plate, grinding nad ju-d-d-d-ering past the North American Plate. In places like the picture L, the ground on both side of the join is rocky and once the shift is over its over. That's more or less what happened to the South of Christchurch where there is a range of hills separating the big city from Lyttelton. Parts of  the scenic route between these places fell down the cliff-face and other sections were rock-covered from above. This route was a regular weekend cycle for The Boy and his pals: we have parent-terrifying footage of their downhills. Four years after the bif Christchurch quake you could see nature taking over: Sumner Road 2015 the road has since been reopened wider & faster but it don't look as scenic anymore.

In the river valleys especially the Avon River wending its way through the Northern suburbs of Christchurch altogether more frightening, because uncanny, things happened. Those leafy residential areas were built there because the land was flat and near the city.  It was flat because it was a flood plain covered in a more or less uniform layer of run-off and silt from the hilly hinterland. For regular housing stock 1 or 2 storeys tall, you don't need elaborate foundations, with piles sunk in the soil until they reach bedrock. Building regs will normally specify a trench filled with concrete [rebar possibly desirable] and then lay brck and mortar or a wooden frame on that.

But that assumes that the subsoil will be more stable that ketchup.  In the Avon valley, the subsoil was sufficiently stable . . . until it was shook; at which point thixotropy [prev, Aberfan] took hold and the soil liquefied. The weighty houses and their concrete foundations settled into the sludge - unevenly. The car [R] is an image so widely propagated that we must assume that sort of event was uncommon for cars. Obviously [?] You can't allow people to live on in such areas, even if their homes sustained relatively little damage. 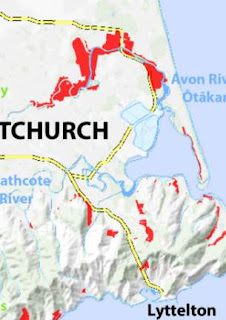 The NZ government therefore mobilised their geologists to survey the whole region to identify areas where it was  foolish to allow houses to be built. You can see from the map, that this is a mix of landslide risk regions in the hills to the South and all the alluvial areas near the Avon River. It can be quite specific: a distance of a few tens of metres can put you on top of completely different, more stable, geological strata. Kiwis live in a democracy not a poluce state, so the government offered householders the option to sell their houses and move elsewhere. In the process they acquired and demolished 8,000 properties leaving the suburban grid to revert to nature. You can't leave empty houses: they quickly get to look unsightly; they attract vermin and vandals; they become a fire-hazard; they hold back the succession to scrub and then woodland. You can't get a grip on liquefaction without movies:
We have a not dissimilar situation in Ireland where hundreds of homes were built on a back-fill of pyrite brought there by geologically ignorant or culpably negligent developers and signed off on by geologically ignorant or culpably negligent planners and buildng regulators. Dry pyrite is hard core, wet pyrite is sludge; it rains in Ireland. Because we live in an unaccountable plutocracy rather than a democracy, the owners of those homes are expected to make the best fist of the disaster as they can. There has been no suggestion that the state would buy those defectively planned, defectively regulated and defectively constructed homes because, well caveat emptor.
Posted by BobTheScientist at 07:30