Dau.I, the librarian, decided I needed to be weaned off 90 minutes a day of Newstalk FM on the wireless of my little red Yaris. The recent consolidation of a national library service makes it really easy to get whatever book you want delivered to whatever library is most convenient - regardless of which county authority issued the library card. Because she works in the system, she had a clatter of talking-books on CD delivered to Tramore library for me to collect. 11 hours of commuting got me through Erebus by Michael Palin which quickly got better than I expected. Then I started in on Sapiens:A Brief History of Humankind by Yuval Noah Harari, that would be קיצור תולדות האנושות in Hebrew. Harari is a Professor of History at the Hebrew University of Jerusalem, not scientifically trained. But we won't hold that against him because Science is A Way of Knowing - not the only way to make sense of the World and our position in it.

What Professor Harari wants to do is force his readers listeners to question their cosy assumptions and comfortable certainties. I'm right beside him on that because unconsidered certainties and their pernicious influence is a running theme on The Blob. 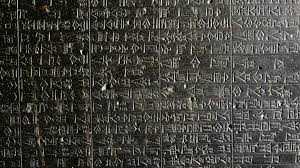 One of the earliest examples of a codified way of life is the Codex Hammurabi: a series of rules and regulations that was promulgated by the said Hammurabi, King of Babylon in 1776 BCE. It is a long list of prescriptions for lex talionis = retributive justice. Reading through the list of accidents, misadventures and crimes makes me grateful that I have little enough experience in that domain:
209. If a man strike a free-born woman so that she lose her unborn child, he shall pay ten shekels for her loss.
210. If the woman die, his daughter shall be put to death.
Whoa! The Perp gets off with a free pass but his chattel daughter gets offed?  If he takes his misogeny down-market and kills the unborn child of a slave, he only needs to pay money. The idea that he might strike the daughter of a 'superior man' is too uncomfortable to contemplate, so doesn't appear anywhere in the code.

Prof Harari goes into the social hierarchies and legal remedies of long-ago Babylon in some detail and then switches, with convenient symmetry 1776 CE to address the "we hold these truths to be self-evident" of the US Declaration of Independence. The juxtaposition might make you pause to question how these two sets of self-evident truths can be so diametrically opposite . . . except in the sense that neither code recognised women as competent adults. And what about us: are we justified in being smug about gay rights; tanned rights; women's rights; children's rights. Just because the convention in our section of society holds these truths to be self-evident does not, with my critical thinking hat on, necessarily mean that they are true for all times and places. Why lookit, our section of society thinks it is okay for two people to batter each other in the face to entertain a paying baying crowd.
Posted by BobTheScientist at 07:11