Money for nothing and the carts for free.
That's a Dire Straits reference.

My late lamented gaffer Neil taught me a lot, while letting me analyse my data in the way I saw fit. Being thrifty but not mean; several colourful turns of phrase; where the other bloke's rights end; eating what's put in front of you; it's okay to buy second-hand books - heck, you might be agreeably surprised. In his last years he discovered Ebay and the last time I visited, he was up and down the cellar stairs gradually flogging off the books he'd bought during our field-trips in the 1980s. Wheeling and dealing, buying cheap and selling dear, was a lot more interesting than holding down a regular job. It helped that he'd been an early adopter of the collecting bug and amassed boxes of comics and coins when they were of little interest to anyone else. Much later the became valuable because so few had rated them when they were available. It also helped that his long-suffering wife was happy to go out and work for the City and bring in a regular income.

In 1982 the Commonwealth of Massachusetts realised that their land-fill capacity was finite and they'd better do something to monetise the trash of their affluent society. Their Beverage Container Recovery Law required all retailers to add a redeemable 5c deposit on bottles and cans. It did a little to lubricate the recycling movement but the tax on each can or bottle wasn't enough to make a sufficient incentive to return this recently chugged Sprite bottle to the nearest store. The bottle would, accordingly, be popped in the nearest City trash barrel. Neil's research and business ventures required at least one trip to the Post Office most days. On his way back home he would rummage through the trash, like a homeless person rather than a solid tax-paid burgher, and pluck out the discarded bottles and cans which he'd then redeem at the Star Market. The return on his time riffling through the waspy trash-bins would often cover the cost of the postage; he was never stung. Or if he was, he never complained. His point was that, although a single 5c deposit wasn't worth troubling about, over a year he could make several hundred $dollar$ of found money.

A similar calculation stopped me drinking in 2012, when the recession began to bite on reaserch funding and I was reduced to 1 day a week paid work in Dublin. Up until then a couple of bottles of old red biddy [prev] at €5.95 were part of the normal weekly grocery cart. That's a glass each, 5 nights a week and well below the threshold for alcoholic dependency, let alone falling down or getting a cringeing hang-over. It added up nevertheless to a little less than one month's salary in my new dire straitened circumstances . . . so I quit. Teetotalism is part of the reason that Dau.II can survive and thrive working only 3 days a week. 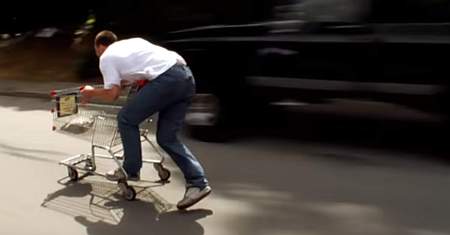 Did someone mention grocery carts? Ya have to check out Murray Siple [life] and  his amazing film Carts of Darkness about racing grocery carts full of bottles down the hills of North Vancouver at 70km/h! That is insane - if you are going to spin off coming round a corner too fast then you really don't want to land in a bed of breaking glass. Then again it adds a certain [artery severing] edge to the pursuit of rush. There is an underclass of alternative types - Big Al; Geordie; Fergie, Little Al; Bob, Max; Buckles - who are taking advantage of the market in 10c deposit beverage containers. Like Neil 30 years ago, they gather up other folk's discards and make a modest living returning the bottles for redemption. If you live behind a tree under some cardboard packaging, then your outgoings are so little that 2-3 hours of scavenging like a latter day hunter-gatherer can support your humble needs. Go Carts! indeed.
Posted by BobTheScientist at 07:30