We have, as family, re-embraced the library as a resource for all people including ourselves. This is partly because a) Dau.I is now working with dedication and ambition for the Dublin City Library Service; but also b) as an antidote to our Amazon Years when we were seduced into buying books for 1c because what's not to love about free cheap books? The realisation that we are past peak consumption now also counts in the equation: decluttering is an obligation to sanity and a courtesy to our heirs. If you live in Ireland you can order up whatever book you fancy for convenient delivery and no fine for holding a few days too long. As my aged father-in-law Pat the Salt lives about 40m from Tramore branch library, the option of traditional shelf browsing is also easy. The Beloved snagged a book that she thought would engage me: Ramp Hollow: the Ordeal of Appalachia by Steven Stoll a History Prof. from Fordham U. As the book fell open at a county map of the region, she was entire on message. The Appalachian Regional Commission of 1967 claimed as their bailiwick parts of 12 USs: from the top - NY PA OH MD KY VA NC TN SC GA AL MS and the whole of West Virginia WV. I share the heartland here: 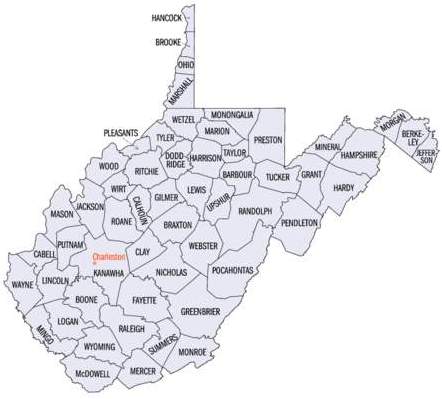 Prof Stoll's book is so distressing that I may not be able to finish it: it is a relentless saga of dispossession and destruction of people and the landscape they inhabited as Capital tightened its heartless screws on the arteries of life. For Profit, proud, small-holding, self-sufficient and undemanding people were reduced to wage-slaves for King Coal. For Profit, age-old forest was stripped from more ancient mountain and the latter top-sliced and dumped in the nearest creek. It was, with hindsight, far worse because all that coal went up the smoke-stacks of industrial power in a dark crushing carbon foot-print.

In 1830s, the NNA inhabitants of the Southern Hills, Chocktaw, Chickasaw, Creek and Cherokee were, in a prelude to the final tragedy, ripped untimely from their farms and gardens and sent along the Trail of Tears to an utterly alien Indian Territory in what became Oklahoma. Within 50 years, the title to their holdings had been finagled from the Scotch-Irish inhabitants of the Blue Ridge Mountains [who sang that?] and other huge tracts of Appalachia by lawyers for Capital. Capital couldn't bare the idea that people would be indifferent to money and content with what they could grow and hunt and gather from the common forest and its interlacing water-courses. The descendants of these dispossessed people voted overwhelmingly for Donald Trump in 2016 because of specious promises that the coal-mines and ancillary industries could be brought back from the dead.

When John C. Campbell was researching his The Southern Highlander and His Homeland [1921] one informant asked him, with rhetorical flourish "What more does a body need? Yonder is a right smart chance of corn and heap of cushaws [R], and the shoats will be big enough to kill for meat after the mast is gone". What more indeed: when Dau.II, my latter-day ideologue of minimal inputs, stopped working a five day week, she asked the same question. "Why, I have four sorts of cheese in my fridge", she added to give substance to the rhetoric.

Swidden is a word sufficiently familiar to me that I had to check I hadn't written something like this post before. It's essentially what we do on our commonage on the hills behind our home: setting fire to the leggy, woody heather Calluna vulgaris and whin Ulex europaeus to promote a more sheep-nutritious aftermath. I am really skeptical about the value of heather burning but in other climes swidden can be extra-ordinarily productive: a slash-and-burn cycle through a tropical forest to plant rice can yield a calorific return on investment of 25-to-1. The best mechanised rice production can do is one tenth of that. Stoll uses his enquiries into the Appalachian tragedy as a platform to investigate other societies where people are content to live simply, work no more than they have to, and spend the rest of their time reciting the songlines of their world. Sure beats working a 12 hour day tailoring shirts for Marks & Spencer.
Posted by BobTheScientist at 07:14