I cover human physiology in The Institute. My only qualification is that "I have a body". But, like much of the material I teach, I've learned a lot and do my best to make the content delivery interesting, true and engaging. Hum Phys is easy to understand if you accept that it is all about homeostasis: multiple interlocking systems to maintain things in equilibrium to quite precise tolerance. Unless you have haemophilia, you eke out a continuous dribble of Factor VIII - just enough to deal with micro-bleeds from knocks and cuts. Treating haemophilia with regular injections of Factor VIII is a bit like dealing with a chip-pan fire with a tsunami. Same with regular insulin injections for diabetes - it's not subtle but it's better than diabetes!

The way I structure the Hum Phys course is to start somewhere and cover each of several systems in turn doing my best to emphasise that all these systems  - nervous, endocrine, circulatory, immune - act in concert. At the end of each section /system I have been in the habit of setting and marking an assessment [usually a MCQ quiz] on the material just covered. I assure the students that it is much easier to accumulate marks in this limited fresh-minted arena than in the Final Exams in May when they are expected to know all the material and the contents of all their other courses too. Nevertheless, about 10% of the class seem unable or unwilling to learn the relevant material despite the notes, the lectures, the executive summary, the text-book, their pals, the internet.

MCQs are a painless way of doing these assessments: they are easy to mark, that's for sure.  I have been inclined to believe that IF there are 5 possible answers to each question and you can therefore score 20% by answering at random THEN someone who scores 25% must know nothing.  This year on my final furlong I've decided that the form of assessment may be at fault. I did really well at exams, particularly MCQs: that facility got me where I am today. But cutting less academically inclined kids some slack, I thought that maybe exam anxiety or dyslexia was getting in the way and I've been giving a back-stop alternative asessment for those who are MCQ-averse.

After the 10% failed the MCQ on The Nervous System. I set them this more vocational [they are all Pharmacy Technicians] task and said that would get a passing grade plus a bit on that section of the course. I've got to make it at least as hard as doing the quiz but not so hard or boring that nobody puts in the extra effort. 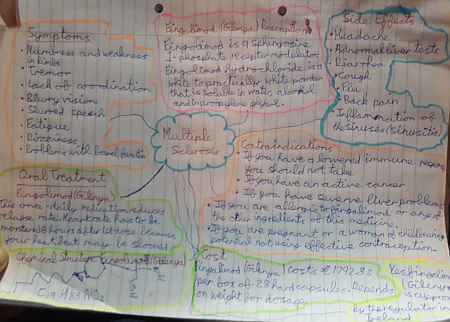 This is one multicolour, scrappy-looking but informative and dynamic answer to Fall BackStop about the drug Fingolimod. I was impressed:
Hey Beatrice: That’s seriously good stuff. Defo worth the mark-up.
Hi Bob: I agree! Thanks, Beatrice
I was so delighted with this answer that I clapped my hands. I'm taking it to mean that Bea worked really hard on the assigned task, that she learned a lot, that she recognises that she had done good work and heck-n-jiminy might even remember something about the nervous system come May.
Posted by BobTheScientist at 07:48