The tragedy of the commons is that, in any interaction involving people living things, individual interests top community interests. If you accept Darwinian natural selection as a fact of life (and all scientific researchers do) then your success - and mine, and his - is measured by how much of a limited resource you can secure for your - and my, and his - growth and development and the propagation of your - and my, and his - offspring into the next generation. You may want to be neighbourly but your neighbour is, in evolutionary and economic terms, your bitterest rival. That view was born in the head of Charles Darwin, grandson of Josiah Wedgwood one of the greatest  magnates of the English industrial revolution. Of course, he'd map his capitalist certainties on to his interpretation of the natural world. It looks like the rapacious exploitation of the world's resources by a relentlessly growing population of human beings is set to turn this blue planet into a beige sump of foulness where only microbes exist. hmmmm, maybe we could try a different business model before it's too late? 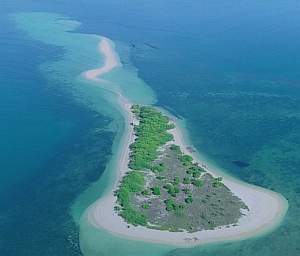 These reflections sprang out of a good news story on the BBC about Vaan Island [R as tropical paradise?] off the coast of Tamil Nadu where India looks across the water at Ceylon. It's good news rather than good news because it is making a small-small step towards saving a wonderful (and valuable) marine ecosystem from obliteration but the intervention does not seem to scale up. In 1972 dry Vaan was 27 hectares in size, in 2016 it was reduced to only 4 ha. which is half the size of our 19 sheep farmlet. In 1986 the Indian government created the Gulf of Mannar Biosphere Reserve, which included 21 of these barrier islands. Since then, two of these tear-drops have been eroded to buggery and Vaan will probably join them in oblivion by 2022. A single big storm may be enough. The problem is, of course, erosion: the islands are basically sand-spits with a top-knot of vegetation covered in a dusting of guano. Where am dat place? Here:

In Ireland we have had some success in maintaining and restoring coastal sand dunes by a) keeping excessive numbers of people, their picnic rugs and quad-bikes off the dunes and b) planting grasses whose roots discourage the sandy soil from blowing away in the wind. Often it is appropriate to install wind-breaks of paling fence and mats of sheepwire to provide physical support until the vegetation gets a foot-hold. These restorative projects are not a quick-fix and need years of support and maintenance if they are to become self-sustaining.

For Vaan and the other sandy islands of the Gulf of Mannar, the erosion is not so much from the winds of the tropical storms that beat in from the Indian Ocean but the relentless suck and heave of the waves. The sea-bed is covered in meadows of sea-grasses. The roots of these monocot plants interlock to hold the sea-bed surface together. But when an enormous beam trawler passes by, scarfing up the shrimps and bottom feeders, the sea-grass meadows take a pounding and the next storm scours off what's left. That exposes the beach directly to the waves. This cycle will repeat itself until there is no island left. It would seem sensible to create a fishing-free zone to allow the meadows and their attendant animal life to recover. But 100,000+ people depend on the fishing for their diminishing livelihood, so it would take a brave politician to implement the restriction of fishing by all those voters. 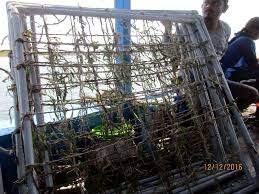 Without the trawlers - yes yes without the people too with their expectations and demands - the shallow marine ecosystem might recover and propagate on its own. But if that ain't gonna happen, then you can weep and do nothing OR set about to re-plant and transplant sea-grass from dense stands to places where the meadows are gone or threatened. That is what Edward Patterson & Gilbert Mathews and their co-workers from Suganthi Devadason Marine Research Institute attempted [original pub].  With great care they dug up three species of seagrasses, Cymodocea serrulata, Thallasia hemprichii, and Syringodium isoetifolium, from one area and transplanted them to places which were going a little bald. They used 1m x 1m plastic squares [above L] covered with a loose network of jute strings as anchors to support the transplanted grasses until their roots 'took'. At best speed with perfect weather, a pair of scuba-planters were able implant 80 plastic quadrats a day. I'm assuming that the quadrats are not anchored shoulder-to-shoulder but in some sort of checker-board - allowing for the established transplants to do some in-filling. Let us generously suppose that the day's work blocks out 800 sq.m. of regenerating meadow.  But Mathews & Co. have identified 45 sq.km = 45 million sq.m. of degraded sea-grass meadow in the bay. You can do the math: it will take somewhere North of 150 years to remedy the damage using this method, even working under optimal conditions 7 days a week, 50 weeks a year. A day's work under-water will be swept to oblivion by a single pass of a trawler. It doesn't scale up. lads. Vaan is doomed. Sorry.
Posted by BobTheScientist at 07:39