SMARTIE [logo R] might lay claim to Ireland's most contrived acronym (Spatiotemporal multiscale Modelling of Antimicrobial Resistance in the Irish subsurface Environment). It is a project funded by co-funded by the Irish Centre for Research in Applied Geosciences (iCRAG) [never 'eard of it although I know several on the payroll] and the Geological Survey of Ireland (GSI) [which has been around for 175 years, so I have heard of that institution].  A couple of months ago, a colleague at work fowarded a flyer from the Smartie Project which offered to test my bore-hole and domestic plumbing for coliforms, pH, and some other impactors on drinking water quality. What could possibly go wrong? Always short of Blob-copy, it seemed a bit of an adventure and so Reader, I signed up. It was a bit cheeky that The Blurb for Smartie explained how for two separate site-visit water-tests "total service valued at over €300. It is important to note that the EPA recommends testing your well water at least twice a year". Without well-owners' participation there would be no Smartie, we don't need to be thrEPAtened'.

Two months after I submitted my application I found that we'd been selected! Smartie needed a) an adult present to b) give access to the well-head to test the depth of the water-table c) indicate the location of an outdoor tap to sample the water. When we sunk the bore-hole, our neighbours Doran of the Well got the contract. As tree-huggers, we asked if he was going to dowse the ley-lines to find the best place to try for water. He raised a quizzical eye-brow "There's no shortage of water in Ireland, where are you going to install the pump and pressure cylinder? . . . then let's set up the rig as close to that shed as we can - save on pipework".

And it was so. We struck water at about 5m, but the flow was deemed insufficient, so they went on down to 35m or 113ft in old money. The price in old money was £4/ft. The drilling went on for several hours; sometimes the drill shaft was motoring steadily downwards but then it would pause and seem to make no progress. Once the super-hard blue granite seam had been penetrated progress downwards went on apace. It was the most entertaining afternoon: much more interesting than TV. That was 23 years ago, Dau.II was in diapers. 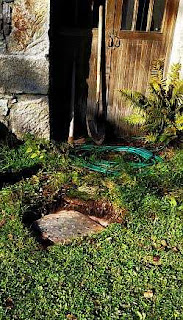 This is now. Between the anouncement of selection by Smartie and Sunday's visit I had to find the well-head which I hadn't seen since the man-hole cover was put down in August 1996. It wasn't hard because I was there when the well was sunk but I had to tonk about with an iron bar until the ground sounded hollow. Then I had to shovel off at least 50kg of dirt and gravel . . . until taDAAAH! thar she blows [L, note shovel leaning u against  the door of the "water-shed]. When Smartie, and her co-pilot / navigator / assistant arrived, we had a) the cover off b) the kettle on. I was delighted to get this boot-up-the-bum to have a look at the well rather than assuming that it wasn't full of dead rats and/or taking water from the surface of the yard. It was also interesting to note that the water surface was only 1.2m below grade, that the septic tank was 35m away and the drain-field another 10m beyond that. The water is pH5.6 which explains why the copper pipes have all been eaten away and replaced by qualpex plastic. pH5.6 is about 25x more acidic than water - pH is measured on a logarithmic scale. In any case, Smartie has taken away several samples of water and will plate the water out on McConkey Agar to see if any coliforms or Pseudomonas are present. If she can get any such 'wild' colonies to grow, she will then see how susceptible / resistant they are to a variety of antibiotics. All good stuff. I hope her well-water data is less noisy than that of my old student, now Dr Lithium.