₿ is for Bitcoin 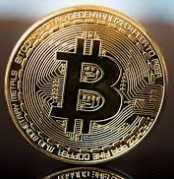 If the ₿ looks a little furry it's because it's got two tick-marks top and bottom to better resemble a $ sign. If I'd been considerably more nerdy in the aftermath of the financial crash of 2007/2008, I might have invested in Bitcoin for a bit of a laff and found myself unexpectedly rich towards the end of 2017 when Bitcoin values peaked close to $20,000. But my financial savvy is so off -centre that I would probably have held on until the cryptocurrency tanked early the following year; falling to about $3,000. As I write ₿1 = €7,928.48, which is a lot of sugar for something that is invisible.

As part of Science Week, Dave Malone from U Maynooth came down to The Institute to ask the question "Is Bitcoin generation using more electricity than Ireland?".  This is a question related to the statement that The Servers [Friendface, Global, Dripfeed, Instaluv, Twaddle etc.] are consuming 10% of the world's electricity. Wot are we like? All those crap photos and phatic exchanges on Instablob have a cost . . . to the Planet, in carbon footprint.

I've known Malone for nearly 30 years since he was one of the SYS$OP for the Math computers in the early 1990s. The Faculty had the empowering idea to turn poachers into gamekeepers by putting the smartest kids in the math class in charge of the computers, their system maintenance, firmware updates, security and passwords. The grown-ups were concerned that these star students would dissipate their creative efforts trying to hack into the computers to get access to the Pentagon. He was kind enough, and rebel enough, to create a mathcomp account for The Boy when the latter was still in secondary school - their social network intersected at a group of Northside Nerds who liked to trick about with computers in those distant pre-WWW days, when the Internet was e-mail and file-sharing.

In order to do his calculations and answer his question, Malone needed to explain what Bitcoin is and how it works. tbh, after his talk, my understanding of the technicalities was still quite shaky - despite me being the only person in the room taking notes. I guess that the majority of the audience had at least looked at the case in Computer Networks class, so the talk was more of a report from the coal-face that brought their dry academic knowledge closer to real life. Insofar as anything about Bitcoin relates to real life. I'm certainly not in a position to prove my knowledge by explaining it to you here. It helped to get an Executive Summary from Dave when I au revoired him after his talk. "Bitcoin is like a puzzle where you get rewarded for trying hard to solve it". That will do. One of the other fanboys on the dais [there were two (2) women in the audience!] recommended But how does bitcoin actually work? a 26m video essay by 3blue1brown.

Satoshi Nakamoto is an alias for the founder of Bitcoin. Somebody with that name wrote the original paper describing the process. There has been a lot of speculation about who the real person is behind that handle. Bitcoins are far to lumpy to buy anything in the real world. Yachts might be priced in units of €8,000 but you can't buy pizzas with that sort of money. Accordingly Bitcoin is fractionated into millibitcoins currently valued at ~$8 and Satoshis = 10-8 Bitcoins. 1 Satoshi is tiny - about 1/100th of a €$cent.

And the answer?  Ireland's total electricity consumption is ~ 4 GWh gigawatt hours per year. That's 4 billion watt hours. Bitcoin mining currently is sucking up about twice that. 9GWh each year.