Science Week 2019 is drawing to a close. There are events in Wexford and Carlow [and probably all over the country] tomorrow but I'm done [in]. On Monday I got my vital statistics check [tl;dr I am alive]. On Tuesday we had a well attended Science Café about the doors of perception. Wednesday is my heavy teaching day, so I concentrated on our students at The Institute rather than Joe Public. Thursday was The Institute's annual Open Day where busloads of secondary school teenagers arrive by bus from all over the Sunny South East; all delighted not to be in class for the school day. Someone said we had 1,500 visitors which makes the concourse a milling hub-bub. I am usually assigned to shout at any youth who expresses the least hint of interest in doing science and give them a selection of brochures which they can take home and throw in the bin. Y' have to shout to be heard and even if the youngsters shout back I have difficulty hearing what they are saying - it's the presbycusis, silly. [a new, but relevant, word for aged me]. 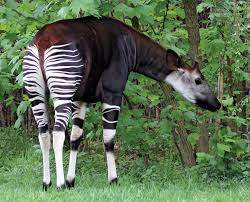 This year, I was promoted upstairs where various scientific demonstrations are on show with, importantly, a bunch of scientists who can explain and inform and answer questions. That was a lot more useful than the general mill on the ground floor. Everyone visiting the Biology Lab had walked up stairs and along the corridor to be there so there was a far higher proportion who seemed interested enough to pause to look down a microscope or get up close and personal to some of our larger animals. Large is relative! We don't have the space to support an okapi Okapia johnstoni [L eating some Congolese vegetation] or aardvark Ocycteropus afer.  What do we have then? well some hissing cockroaches Gromphadorhina portentosa; a common tortoise Testudo graeca; a tarantula Brachypelma somethingi and some giant African landsnails Archachatina marginata. They all live in quite austere conditions in glass terrariums.  For Open Day, these lads were all on display and the cockroaches and snails were available for petting: 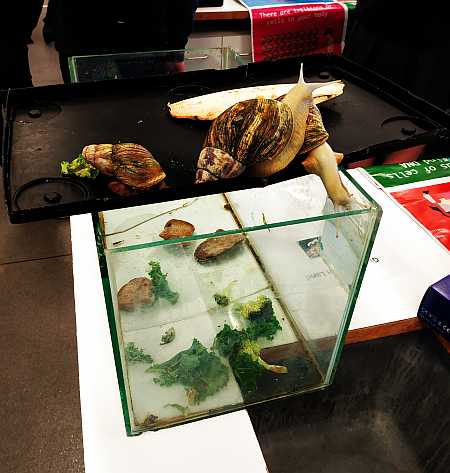 The caption for this photo is "No Jim, don't jump: you don't want to finish up like the little 'un". It is an occupational hazard with these snails that they will course about their space and not only on the floor. Far too many times, one of them has fallen off the wall onto the pointy bit of their shell. If that chips off it serves as a gateway for fungal infection which the snail immune system is ill-equipped to handle up there: presumably the front foot of the snail wades through the same fungal spores without much bother.  You can't easily tell from the crap photo but Junior is the latest snail to take such a tumble. I was explaining this tragedy to one group of school-girls when one of the larger snails did a runner and made for the edge of the terrarium lid: "You'll never take me alive, Copper" shis companion responded with equal "speed" to intercept the fatal plunge. I use the pronoun shis because this, and most, species of snail are hermaphrodites [having both male and female genitalia]. I'll let you know if the baby survives. Discussion about its future elicited a number of solutions from the kids about how to seal the shell hole in a sterile fashion that didn't require playing a blow-torch over the point. Really small direct interactions with teenagers, especially girls, have been shown to make a significant difference in youngsters switching to science. A ten minute chat will make more difference than 750g of Prospectus.
Posted by BobTheScientist at 07:17