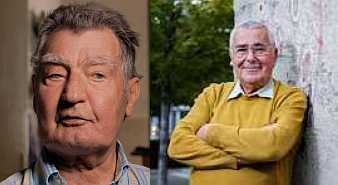 Remember remember the Ninth of November!? Thirty years ago, partly because of a bureaucratic communication cock-up in the DDR helped by some leading questions from Western journalists at an East Berlin press conference, some of the border crossings in the Berlin Wall were opened up on the evening of the 9th of November 1989. Either by Heinz Schäfer [L] or Harald Jäger [R] who were local gate keepers. Schäfer was probably first responder but Jäger had a TV crew in attendance and has now become the GoTo for a soundbyte. It's like Claudette Colvin getting ooffed from history because Rosa Parks made better copy. A flood of Ossies went through to sample bright lights and champagne of The West. It was hard to put the cork back in the bottle without a blood-bath and no local commander, certainly not  Schäfer or Jäger, was gung-ho for the status quo enough to have his men fix bayonets. Over the next days and months, the wall was comprehensive demolished, initially by entrepreneurial Mauerspechte [wall-peckers] and later with bull-dozers and back-hoes by the Border Guards.

Along the way, someone realised that the symbol of division [and oppression if you're a Wessie] had heritage value and a few segments of the wall were retained as a memorial and tourist attraction. The Wall was more than 100km in length with another 50+km of West-East border maintained with fences, wire and automatic machine-guns. In 2018 a chunk of Wall was rediscovered in a jungly part of the Südpanke-Park. Here's another section quietly reverting to nature like Chichen-Itza after the Maya departed. 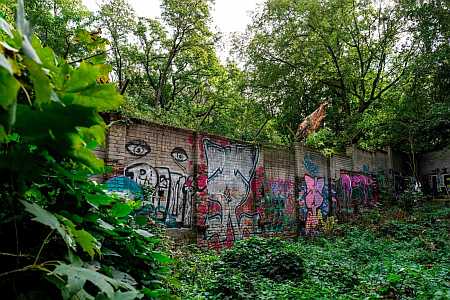 I like the idea that something concrete and so steeped in history can be hidden in plain sight for so long. A bit like the Knockroe Ringstone.
Posted by BobTheScientist at 08:04