Cooking by the handful

. . . and not by the book. When Dau.II and Dau.I were still living at home and spending a helluva lotta time in the kitchen, I put a huge sign above the stove asking

"Are we going to measure or are we going to cook?"
I ripped the idea from a cook-book that had no recipes when we were given it but rather blank pages and an occasional inspiring Foodie quote. But it was also a homage to my grandmother's apple pie which was done entirely by feel and experience. I'm not even sure if Grannie had a weighing-scales in her kitchen. I was consciously trying to encourage experimentation: what will happen if the recipe calls for 8oz of flour and you only got 7? Is there a substitute? Will it make any difference? How can you compensate?

I'm not saying recipes are without value, no cook should have to reinvent the wheel of getting the proportions correct for Madeira cake: if you double the butter, most of the excess will end up  in a puddle on the oven-floor. That happened to my first 2019 Christmas cake, perhaps because I had no ground almonds but kept the same amount of butter as my standard recipe. But it's also really important to reflect on allowable variation. We spent a part of last weekend doing a final wrap on the green-beans and tomatoes in the polytunnel. We were a little slow off the mark this year, so the plants didn't really have a full season to grow big, come to flower, get jumped by the bees and set fruit. Accordingly there were a good few green tomatoes which were never going to get red enough to offer to the vicar in a sandwich. Obviously the thing to do is make Green Tomato Chutney. 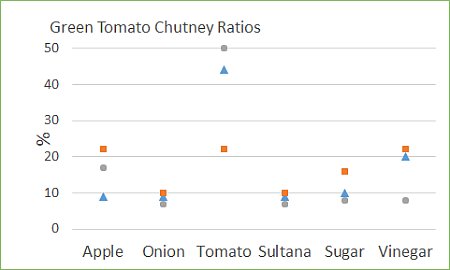 Obviously the thing to do next is get on Google to get a handle on the proportions. The first three recipes came from BBC ▲, RTE ● and GIY ■[Grow-It-Yourself] only the last of which has an obvious credibility in the business of growing and preparing food. All of these options bulked out the ingredients with apple, onion, sultana, sugar, vinegar . . . and tomato; and then got fussy with the spices - cinnamon? clove? chili? which add punch for flavour but are small potatoes in weight. What struck me was the wild variation in the amounts included in each recipe. And the fact that some give weights in kg and some in old money lb. The only thing was to enter the data into Excel and have it compute percentages for these six bulk ingredients. When thus normalised it is clear that the wild card is the start opf the show. In the ■ recipe, apples and tomatoes get parity of esteem; on the other hand, recipes ▲ and ● had about 5x more tomatoes than apples. As I'm trying to use up toms and have refused bushels of apples all this Fall, I won't be using ■ this year, thanks. I'll have to buy some vinegar, everything else I have, except maybe time.
Posted by BobTheScientist at 15:21