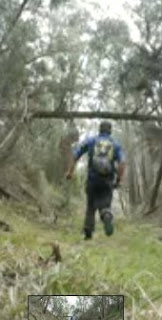 I wrote about Prof Louis Agassiz, glaciologist and natural historian, because he was able to find wonder in the ordinary by spending large tracts of his Summer vacation on a minute survey of his back-yard in Cambridge Mass. That capacity to embrace the daily and look at normal things with care and attention is extra valuable in the trivialised sound-bytie tweet-attention-span world young people now inhabit. A couple of days ago, youtube decided I would enjoy a quietly contemplative short vid in which Beau Miles scrambles, trots and bush-whacks his way on a long defunct railway branch-line close to his own back-graden. Youtube was right: I love the idea of running along a chunk of industrial heritage with a long-handled shovel to hack at the brambles [freeze-frame R]. It's nice: there are no car-chases, no sex, only the mildest of threats, and the local police do not arrest him.

One reason for a sense of empathy was that years ago I did some exploration of railway heritage which, looking back, was demonstrably reckless and ill-considered. At the time, of course, it seemed a bit of a jape in the sense of Five Down a Sardine Sandwich rather than One Goes Down a Tunnel . . . without a torch, PPE, or letting anyone known about the plan. The difference between 15 and 65 is 50 years and the development of functional imagination to replace a sense of immortality. In the very earliest days of railway mania, some entrepreneurs surveyed a built a 6 mile = 10 km branch railway line from the city of Canterbury to the seaside resort of Whitstable in SE England. Opened in 1826, C&WR [soon to be nicknamed the Crab & Winkle Line] predated the Liverpool and Manchester Railway but was initially operated by horses and pulleys because the gradients were too steep for the feeble steam locomotives of the time. One of the insuperable gradients was Tyler Hill, but the 19thC engineers solved this problem by driving a tunnel through the hill that was nearly half a mile = 700 m long.  The railway chuntered along for 100 years until the passenger service was closed in 1931, while freights ceased to be economic in 1953. 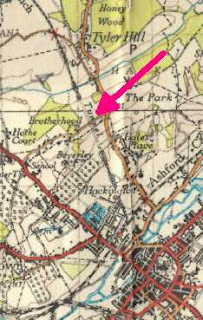 Without traffic the line lapsed into dereliction. In ~1969, I was 15 and acquiring my very expensive education in Canterbury. I heard about this railway tunnel and one afternoon decided to walk through it. The thought being the deed when you are an impulsive teenager, I set off forthwith without telling anyone.  The South end of the tunnel (nearest town) had been fenced off and boarded up but a recent assault by vandals had prised open part of the barrier so I slipped down the embankment and started off along the darkness. The North end was revealed as a single pixel of light and I walked briskly along until I stumbled over a pile of loose bricks. After a few minutes of more circumspect progression and I was out in the fresh air again.

In 1974, the tunnel collapsed, more or less where I had tripped over the pile of bricks, and part of the Cornwallis Building of the University of Kent at Canterbury was destroyed in a dramatic subsidence event. When I grew some sense (it comes with imagining your own children coming to harm) I reflected on what a dip-shit I was as a teenager. If I'd tonked my head in the tunnel, it would have been a long time before anyone found my recumbent body and likely the rats would have gotten there first. The Tyler Hill Tunnel, what's left of it, is a listed building. In retrospect my tunnel experience was nothing on the adventures of Buttercup the cow.

I didn't learn much, really. In 2008, I went to spend a week with my pal Tadek in NE Poland up near the Lithuanian border. Indeed we went on a mushroom hunting trip and looked down on the armed guards manning the nearest border post. At one point on the road-trip we paused in a lay-by very close to a concrete WWII pill-box and I went up a dirty embankment to explore. About 3m in, before my eyes had acclimated to the dark, I pitched into a huge hole in the passage floor that was filled with a variety of tinnies and other detritus. When I emerged nursing my bruises and scrapes, my 'friends' explained that, when in active use, that hole was a man-stopping feature optionally covered with a wooden draw-bridge. They hadn't thought to stop me from entering the bunker, though.