It's coming up for Science Week 10-17 November across the country; even in Wexford. I had a lot to do last year [Eponyms; Gabriela; networking] but the local organisers haven't asked me back for an encore this year. I'm not very good at sitting on my thumbs, so I've been making what hay I can from Other Men's Flowers. One of the old style lecturers at The Institute makes up poster boards each year with batches of Thinking Puzzles which can be stated simply but require some mental work to figure out. Some of these puzzles are very old. I share some here:

P1. Man owns a square field which is too much to manage. Accordingly, he fences off a quarter of the section and divides the rest of the property equally among his 4 children. Because the kids are self- centred and argumentative, he finds a way to divide the white part of the field into 4 holdings equal in both size and shape. How did Fair Deal Dad manage this task? 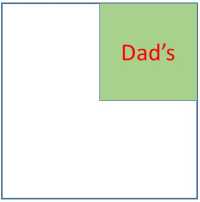 P2. Given three containers which hold exactly 8 lt, 5 lt and 3 lt. If you start with the largest bucket brimful of beer, how can you contrive to measure exactly 4 lt in at least one of the containers?

P3. Given a kilo of coffee, weighing scales and two weights of 10g and 40g, how do you separate the coffee into two parcels one of 200g and one of 800g? Not more than three weighings are allowed.

I set a sample of these problems to my 1st Yr Quant Methods class last week as a change from doing self-directed algebra problems until heir eyes bleed.


P1 The standard solution to the divided inheritance is to cue on the shape of the 3/4 plot and shrink it. 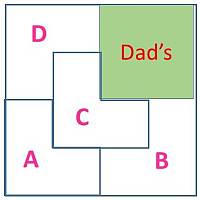 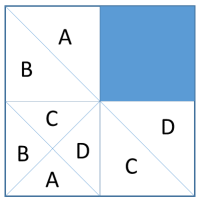 But one of my weaker-at-math students Jafar came up with nifty solution to the inheritance problem. Where I come from having disjoint farm-holdings is the norm rather than the exception. Triangular fields are rarer than boggy fields, it is true. This is a good example of looking for some multi-dimensionality in the mental toolkit. People are smart in different ways. Give that boy a Field's Medal. 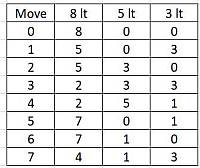 P2. This puzzle and ones like it are really old; with lots of variations. Mine works according to the table [R] but there may be a more efficient, shorter algorithm.

P3. I scratched my head about this for an hour and then threw up my hands and parked it. Two days later I was driving to work and >!kaChinnng!<  the answer came to me. What I had missed was that you can weigh coffee against coffee.
1. split the kilo into two equal weights (of 500g each)
2. split one of those into two equal weights (of 250g each)
3. weigh a portion of one of these quarter-kilos against the two weights.
That will leave 200g; consolidate all the rest of the coffee piles into 800g: job done.


Posted by BobTheScientist at 11:23