The Central Statistics Office An Príomh-Oifige Staidrimh is not just the overseer and processor of the decennial Census. They gather information about all aspects of life in the Republic and eventually get them into a form that can be interpreted by the government, other decision makers, movers and shakers as well as bloggers and constructors of pub-quizzes. Without reliable information, planners are at nothing, money will be wasted and we'll have a poorer, less equal society as a result. The CSO has an interest in encouraging numeracy, data gathering and crap-detecting in young people. Without embryonic quants coming through the school system, the office will have to employ numbskulls. The Visual Display of Quantitative Information [title of iconic book by Edward Tufte] is a vital skill that needs to be nurtured and encouraged: dense spread-sheets of data lack the power to persuade.

For the last several years the CSO has sponsored the John Hooper Medal for Statistics; and the 2019 results were posted in mid October. Next year's competition has been launched with a submission date in March. The deliverable is a Poster [PDF or PPT] and individuals need not apply because the learning outcomes include: "work as a team; investigate real questions using data;  use their analytical and graphical skills; interpret statistical results; develop skills in written communication". It is clear that these skills / attributes are what the CSO hopes to hire later.  I'm not going to make a judgement about quality but the range of topics is wide although somewhat limited by the limited experience of the competitors: teenagers are interested in txtn, transition year, social media, sports but some are also into the environment and politics.

The winners of the Irish medal Aisling Barry and Katrin Birk from Bandon Grammar School, Co. Cork  also won the senior category in the International Statistical Literacy Project (ISLP) poster competition, with their entry titled “A Statistical Analysis of the Accuracy of 5-day Forecasts in Predicting Hot vs Cold Temperatures” that Global competition was run by the International Association of Statistical Education (IASE) in KL, Malaysia. Barry and Birk used a Python script to scrape predicted and actual data from the Web for seven really random locations: Astana, Buenos Aires, Houston, Kinshasa, Roma, Sahr, Winnipeg. Prize to you for being able to locate these cities on a map of the world [accurate within 200km will do!].

Another couple of quants, Kate Bagnall and Bobbi Beattie from The King’s Hospital, Dublin. who won an honourable mention in the John Hooper event were young enough to be shipped out to KL for the born since 2003 category. Where they won! with “Using statistics to investigate changing use of language in Irish Primary students’ writing after 80 years”.  They also used a Python script to count word-usage among national-school children in the 1930s and now. Kids nowadays don't know nothin' about churning, warts or wells (they're all about wellness instead): 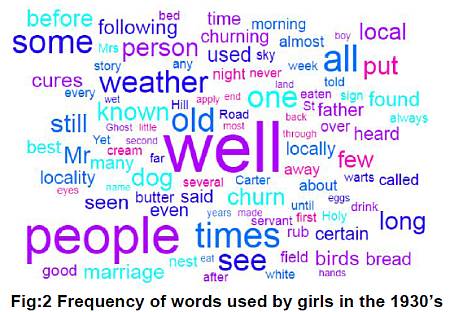 In 2015 the Oxford Children's Dictionary controversially removed a number of 'nature' words from the most recent edition to make room for current knowledge and usage. Bagnall and Beattie matched these lost words against those actually used by kids in the 1930s and came up with a long list.
Plants: vine, oats, buttercup, gooseberry, ash, ivy, bran.
Animals: magpie, lark, doe, ox, ass [bray], thrush, monarch, blacksmith.
Religion: parish, saint, sin, elf.
But even modern children are using words, although fewer  in number than 80 years ago, that the authorities have deemed to be irrelevant.
Posted by BobTheScientist at 07:35