edric's web.  I've learned something important these last tuthree days: it's okay to make snap judgements but it's better to give a piece a chance. The Boy and his family were over this last weekend and they gave me a book with a warning: it had received mixed reviews and not everyone could get beyond the first chapter.  It was The Birth ofa theorem: a /mathematical Adv(en)ture by Cédric Villani. The mathefication of the title will give you a warning of what lies inside the covers. Reviews: Grauniad. Spectator;  Reactograph. It's what it says on the tin - an explanation of how a mathematician works. But it's not an explanation in the usual didactic form: it's an opportunity to be a fly on the wall as Villani has an idea, or two, and makes errors, or four, and works till his brain melts for a month, or eight, to follow his initial insight round the world until it is run to earth back down the rabbit hole where it all started. It's a pilgrimage of the intellect, where the journey is at least as important as the goal. I've said before that science is hard and this journey is not easy, either for Villani or Clément Mouhot his collaborator or the reader.

The middle of page 5 presents us with "Yes, a Moser-style scheme. The key is that the Boltzmann operator . . . true the operator is bilinear, it's not local, but even so it's basically in divergence form - that's what makes the Moser scheme work. You make a non-linear function change, you raise the power . . . You need a little more than temperature, of course, there's a matrix of moments of order 2 that have to be controlled. But the positivity is the main thing". Even the words Joe Reader thinks he knows here will have a peculiar technical meaning that that will slide from his mental grasp like so many wet sprats Sprattus sprattus. Page 6 is where some of you will fling the book across the room and try the crossword instead.  I'm glad I didn't because the narrative settles down after that . . . or rather you begin to get the cut of Villani's jib and realise that the book can be approached at many different levels. At least the dark paragraph transcribed above is written in a sort of English. Perhaps 10% of the book is filled with page after page of another language which is even harder for Jean Dupont to read:

Even mathematicians will probably skip those sections because they have access the whole theorem and why nibble the crumbs when you can eat the whole 190 pages of cake: On Landau Damping by C. Mouhot and C. Villani.  I gather that these mathechunks are put there as another way of illustrating the journey.  Another fraction of the book is comprised of verbatim e-mails including date-stamps and e-addrs all in courier to lend them the ring of truth.  Stranger structural ideas have been employed in recent literature and the to-and-fro between Villani and Mouhot is particularly interesting in showing where the ideas come from. They rarely spring fully formed like Athene from the head of Zeus - one will have a lumpen thought that will unearth a half-memory in the other which will be added to the lump and lobbed back. Francis Crick and Sydney Brenner, giants of early molecular biology, shared an office for 20 years. They had a rule that either one could blurf out whatever came into his head and the other would at least listen like Bob the Ear Scientist. And it is clear that both of the co-authors of the eventual paper has a life outside the theorem: they meet people and talk to them and that triggers a cascade of barely related ideas which may well get thrown into the melange. For six months of the birthing-process Villani left France for a sabbatical in the Institute for Advanced Study in Princeton. The time difference gave the team a much longer working day! and the e-mails came thick and fast. To accommodate the mathematical notation lots of TeX phrases trip off the keyboard.  TeX is the type-setting language invented by Don Knuth to allow him to communicate more easily with fellow-geeks. This gives a flavour:
the quadratic formula is $-b \pm \sqrt{b^2 - 4ac} \over 2a$ \bye

Another extraordinarily rich chapter is a list of all the music that Villani listened to and was calmed and inspired by while he laboured at the mill.  I've spent the last couple of hours following these up on youtube.  Let nobody claim that France and the French have been steam-rollered into embracing a common culture driven by Hollywood, Liverpool and New York. There is a whole almost independent culture flourishing in France to which anglophones pay little or no attention.  Don't forget that Diva is The Coolest Film of the late 20thC. Never heard of Gribouille? - I hadn't - you should.  We are spared pages and pages of manga, but that also was a source of solace for Villani.

Yesterday I had a poke at Douglas Hofstadter suggesting that his book was bloated, too clever by half and could do with a good copy editor. The Birth of a Theorem is also 'difficult' but much better because it is constrained: everything comes back to the theorem and its gestation.  It goes round the houses and up strange and even threatening alleyways but it always comes back to Landau Damping. You get a picture of who Villani is as he struggles in a web of his own making. A bit like The Blob: my whole life will eventually be laid out as asides to whatever I write about each day. Except that I am a simple chap who has only had three two good ideas in a lifetime of science: there is less for you-the-reader here. 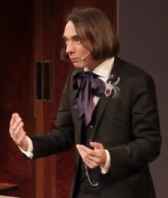 Ho hum, I don't expect you to go out and buy the book so I'll make it easy for you and recommend a Royal Institution lecture with the same title and author. . . and don't forget the Q&A session afterwards. Here again you need a little patience. Villani presents himself as one who has resigned from his own time and joined Arthur Rimbaud and Gérard de Nerval in the middle of the 19thC: a dark three-piece, set off with a fob-watch and an extravagant cravat; an Oscar Wilde haircut and a huge spider-brooch on his lapel. de Nerval is famous for taking a pet lobster attached to a blue silk ribbon for walks in Paris pour épater la bourgeoisie. Villani's spider (as revealed in the Q&A) is an enigma: in dressing such a statement Villani makes us stop [WleF!]  and think and that is the first step to having an original idea ourselves.

Some other stop-me-and-think-one ideas are
Be watching Professor Villani in future, he won the Fields Medal in 2010 when he was less than 40 and is now director of the prestigious Institut Henri Poincaré where he is in a position to make a difference. Chapeau bas!

Posted by BobTheScientist at 08:30