Nihilification, n. Considering that something is valueless.  Among the infinity of things that won't be remembered this weekend: The Heron Bridge Collapse, Ottawa, 10th August 1966. There was a brief flurry of retrospect when the 50th anniversary came round in 2016.  50 years is a good interval for such things: you can reasonably hope to get a soundbyte from people who were witnesses or participants. At 53 years, the event is lucky to get an "On this day . . ." mention by Wikipedia. The wannabe engineer in me is interested in structural failures [ABC, Florida - Resonance, Salford - Too low, Emmiscorthy - Gusset-plate, Minneapolis - Rust, Connecticut and don't get me started on the damn dams] because we can learn something from them; and maybe even tighten up the specs to prevent them re-occurring. 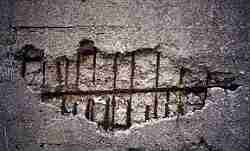 The Heron Bridge across the Rideau River and Canal was mandated by the Canadian Federal Government in deference to the great god Car, which we in Ireland still worship to the exclusion of other, healthier modes of transport. A lot of similar infra-structural projects were going on across North America, it being the boom-time for the US Interstate System, authorised by President Eisenhower in 1956 and finally "completed" in 1991. I say "completed" because by the time the project was coming to an end, significant structural problems were starting to cry out for refurb or replace. One thing we've learned is that road-salt, rusting and rebar are not a good mix: hint spalling [R].

Usually with bridges, if you can get them up, they stay up for a long time, mainly because of engineers' tendency to calculate the structural design specs and then add 50% for the unexpected.
If they fail later, it is because of unknown unknowns . . . which thereby become known unknowns that get incorporated into future engineering text books. Things like resonance [see above] which entrained the Tacoma Narrows Bridge until it bucketed itself to death by "Aeroelastic Flutter" [famous movie - good technical explanation]. Or, because engineers are fallible, they just forget to include something that, with 20/20 hindsight, elicits a big "duh!, I would never have done that" from the community of [smug] engineers who haven't [yet] made a similar mistake. The text-book example of this is the collapse of the skywalk in the lobby of the Hyatt Regency Hotel in 1981. A poorly thought through design modification put 2x pressure on a series of nuts holding up the stack of floors [detail L]. 2x is 100% an increase: well over the generous 50% for emergencies usually factored in. The design mod was driven by a desire to save costs by one of the sub-contractors; several people were found to be culpably negligent and stripped of their engineering epaulets.

Heron was ambitious: The Man wanted two 3 lane highways across the river built of ferro-concrete, the wonder material of the age. The slabs of the road-bed were supported on ferro-concrete pillars and poured in situ. The wet concrete didn't fall down into the river because it was poured into timber shuttering supported on a forest of timber trusses [above]. When the concrete set it was able to support its own weight between the trusses but until then, it had the structural integrity of wet tissue.

At 3.30pm on 10 August 1966, after a day pouring 2,000 tonnes of concrete, the timber framing of one section of the bridge collapsed and flipped the other side of the structure on top of the debris. That debris included several dozen workers who fell 15m to the riverbed only to be slobbed with wet concrete, shafted by rebar , clonked by 4x4s and generally turned into a mess sandwich. Nine men died and 60 were admitted to hospital covered in setting cement, some with rebar sticking out both sides of limbs. Emergency services worked tirelessly into the small hours of the next day pulling people and bodies from the heap. In those days, the widows of the dead were pensioned by the company, but the injured gave thanks for their survival without thinking to lawyer up. Mike Lecuyer had only been on the job two days. George Davis was at the epicentre of the disaster minutes before the event but took himself for a short walk and quite randomly thereby finished up above one of the pillars in comparative safety.

You really don't want to over-think these things.  Lecuyer and Davis are duly grateful to be alive but don't imagine that their survival is a message from God. If you believe that you have to accept that the deity had no use for Clarence Beattie, Lucien Regimbald and Joas Viegas who were among the dead. In the grand scheme of things we are all equally without value, except to ourselves and those we love. Trying to work out a reason for it all will just get you in trouble like Brother Juniper in The Bridge of San Luis Rey. He finishes up burned at the stake along with his report on that collapsed bridge because his accumulated evidence questions the omniscience and ultimate benevolence of God. The conclusion that "the wicked [were] visited by destruction and the good called early to Heaven" is not what we would call a testable hypothesis, that's for sure because both balck hats and white hats finish up dead. Maybe Charles Bowen is more realistic:

“The rain it raineth on the just
And also on the unjust fella;
But chiefly on the just, because
The unjust hath the just’s umbrella.”
Posted by BobTheScientist at 18:25