If we want trees to be a solution to our collective carbon footprint, we have to plant 'em, prune 'em and then leave 'em alone for at least 300 years. Planting thousands of hectares with a Sitka spruce Picea sitchensis desert with the intention of harvesting in 30 years is just a money-making scheme; worse in many ways than doing nothing-at-all. We've done our bit, planting up 0.4 ha of our 6.5 ha holding with a mixed woodland: that's about 1,500 trees each for The Beloved and me: or 500 each if we share our smug glow with the people who helped do the planting. We didn't do that in a day! We started in 2007 and spent money and time on the project over the next two winters. Mixed woodland is the best: we planted 10 different species of native Irish trees (mostly
Scot's pine; Pinus sylvestris
Larch; Larix europaeus
Ash; Fraxinus excelsior
Oak: Quercus robur
and there will be other blow-ins on the inventory if we did a careful audit.

That's sort of pathetic, isn't it? If we wanted to make a difference we'd have Wenceslased in the footsteps of our pal Bill Liao who founded a global tree-hugging charity called We Forest. His enterprise has leveraged the planting of 19 million trees up to the end of 2018 = 2.4million in that year. They have a rather useful FAQ for the science/math of tree-planting to offset our carbon feet. The trees cost between €0.60 and €3.00, and we're looking at an income / throughput of about €2,800,000 on 2018; of which 22% goes on 'livelihoods' which I'm guessing the rest of us would call salaries = a wage bill of €600,000 spread across 43 'heads' who are livelihooding for WeForest. That's less than €15K/yr each which seems very low if you're living near head-office in Brussels and a king's ransom for those nearer the coal-face in Ethiopia and Zambia. 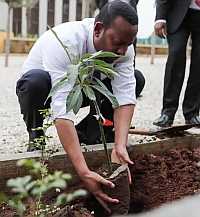 As the contributions of individuals are pathetic compared to NGOs, so NGOs pale into the background compared to Governments, even comparatively poor 3rd world governments like Ethopia's. Prime Minister Abiy Ahmed [sleeves rolled up for work, but tie still round his neck to symbolise the other important responsibilities of the Head of State] has launched a plan [Exec Summ Grauniad] #GreenLegacy for his country to plant 4 billion trees in 2019 - that's about 40 each for the plain people of Ethiopia. Anyway #GreenLegacy was off to a flying start on 29th July when they co-ordinated the planting of +350 million trees on a single day. That beat India's Guinness Book of Record - a mere 50m/day in 2016 - into a cocked hat. Go Ethiops!

On the basis that some plant and some lean on the shovel watching the planting [PM Ahmed is below average "And the women answered one another as they played, and said, Saul hath slain his thousands, and David his ten thousands" 1Sam Ch18v7.] We have data to see who has been punching above their weight on the Ethiopian Tree Planting Stakes. I've snagged populations for each of Ethiopia's provinces from Wikipedia and the tree planting stats from #GreenLegacy, to generate the following table:

And the winner is . . . the Plain People of Oromia [6 trees each] which is the largest and most populous administrative region in the country and which includes suburban Addis Ababa. Nevertheless, the diligent Oromians planted more than double the number per head as the lazy-arses in Amhara [3.3 trees each] and Tigray (Project Desa'a and Seret) [1.8 trees each] where WeForest are devoting their main energies. There's not enough evidence to suggest that WeForest is putting a damper on local initiatives. Obviously other factors are at play than available Effectives to plant the trees. The lowest number of trees are in Afar and Somali, which have really low population density, probably because the climate is too brutal for normal Teff agriculture: trees don't grow in deserts. Or it could be that the locals recognise that it would be impossible to protect the baby trees from rapacious goats and donkeys.

Here's a piece-to-mic from the CEO of WeForest about the Ethiopian initiative.


Posted by BobTheScientist at 07:19