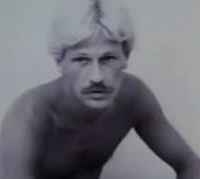 Patient Zero was long believed to be Gaëtan Dugas [R], an air steward, who a) Canadian b) gay c) flamboyant d) attractive and e) promiscuous. All the gays I know well are really monogamous, in long-term, cohabiting, monogamous relationships, if not actually availing of the right to get married. Dugas was one of those who helped solidify the cliché that gay men were mad for sex, with as many different men as possible. Think Warren Beatty for the heterosexual equivalent: he reportedly had sex with 13,000 different women. Whoa!? That's one-a-day for 35 years. Promiscuity tsk tsk  was part of the trope that enabled the bourgoisie to be smugly judgemental when HIV/AIDS burst out of Africa and started to infect people who matter - white, male, middle class - in the early 1980s. The CDC in Atlanta and clinicians, esp in New York and California, were caught on the hop because the symptoms were so diverse and so invasively shocking and it took a while to see what were the epidemiological connexions. It didn't help that, even in NY and Haight-Ashbury, men were understandably reticent about admitting to active homosexuality.

At the time it wasn't clear who gave and who received the virus, not least because there was a quite poor fit between the time of infection and the first manifestation of symptoms about 9 months later. Until they could identify the cause, there was no possibility of a cure, and one of the techniques was to do a forensic audit of who had sex with whom and when. Dugas was particularly helpful in identifying his previous partners of which he'd had hundreds and hundreds. By mirror, his name came up frequently in other interviews because a) he wasn't shy b) he was strikingly beautiful and c) he had a peculiar name. The scientists would be at nothing if events had unfolded in Cork where half the men in the city are called Mick or Pat Murphy. In their efforts to keep a semblance of discretion and anonymity, a clinician in Los Angeles flagged Dugas as Patient O-for-Outsider. If he'd got E for Exotique his subsequent reputation wouldn't have been quite so damned because O soon came to be mis-copied as 0 and Patient Zero became A Thing to the  media. Dugas died in 1984 as his kidneys collapsed from multiple immune-deficient assaults including Karposi's sarcoma. This diagram from 1984 has Dugas front and centre [as 0 = Index patient] based on interviews and the time-line of symptoms: 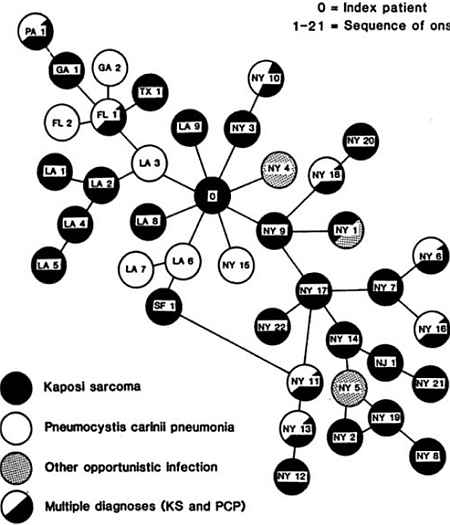 It wasn't until 30 years later that a careful analysis of HIV sequences from old tissue and blood samples definitively put poor Dugas back in the ranks of victims rather than as a sort of cheer-leader. 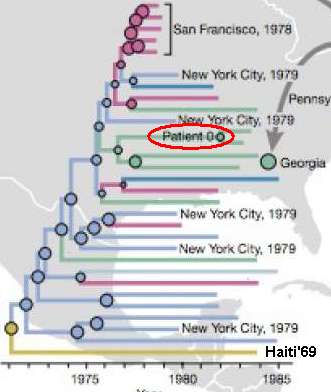 The lead PI on that study was the same Michael Worobey, whom we met more recently tracking HIV samples back to 1966 in Kinshasa. Forensic HIV work is particularly delicate because it is an RNA virus; RNA is much less robust that double-stranded DNA and tend so get degraded. Especially if subjected to multiple freeze-thaw cycles as samples are taken out of freezers, analysed and then put back in the cold. Worobey's people used a technique called RNA jack-hammering which assumed the molecular quality would be marginal and worked to reliably reassemble the fragments after sequencing. That analysis [Quartz QZ summary, original paywalled] showed that, w.r.t. the New World at least, Patient Zero likely came from Haiti to New York about 10 years before Gaëtan Dugas burst on the gay scene and died from having too much fun.