If you haven't read Philip Pullman's magical [young adult] books, you really should order up the first book in His Dark Materials trilogy from your library. Here on The Blob, I used to cite books with a link to Amazon, especially if they were available for €$£0.01. We're boycotting Amazon at the mo, because of the air miles, the hunting of their employees and because I don't want such monolithic monopolies. Libraries are the future! One of the destinations in Northern Lights is Svalbard, an archipelago in the far North, where panserbjørne armoured bears do battle with the forces of evil. All good stuff; ripping yarn. Me and my pal Rene were getting fat on a cup of tea and sour-cream cake the other day racking our [shit-for-]brains to retrieve the old name Dutch name for Svalbard. Но́вая Земля́ [NL: Nova Zembla] was floated but we both knew that was further East. Ans: Spitsbergen! Rene made a pile of money working at sea in the fisheries when he was young and has a restless and skeptical curiosity about the natural and historical world especially concerning they that go down to the sea in ships. He mentioned the existence of the 1619 Dutch foundation of Smeerenburg on the NW corner of Spitsbergen. Less than a week later, I see a link to Smeerenburg on the bloggoburg, which I abstract for you here. 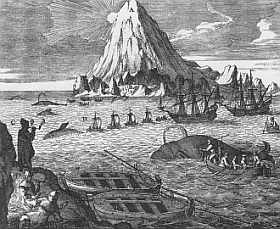 1619 is a long time ago - 400 years indeed. Boston was founded the following year. 600,000 people live in Boston now [just the city; if you include the 'burbs it's nearer 4,000,000] but the population of Smeerenburg is zero. Pretty much everyone [total is a tad over 2,000 souls] in Svalbard now lives further South in Longyearbyen. Dutch whalers had been coming North since Willem Barentsz had passed by looking for a North-East passage to Cathay and untold wealth in 1596. His reports of sleepy lardy bowhead whales Balaena mysticetus waiting to be de-oiled caused a bit of a gold-rush to the North. In 1614 a consortium of Dutch cities formed the Noordsche Compagnie and started to send ships to SpitsbergenThe hard chaws arrived as soon as the ice broke up in the Spring and stayed all Summer killing, flensing and trying down the white gold. The technology of the time required that the rendering [=trying] was carried out on land, and so the flensing process naturally followed ashore.  The Effectives lived ashore in tents. The dead whales were hauled in to the beach. Each year the whalers had to travel further and profits started to fall. In 1619, the shareholders in their comfy offices in Hoorn and Enkhuizen decided to build permanent housing in Smeerenburg, so that the work could commence three weeks earlier and finish three weeks later. 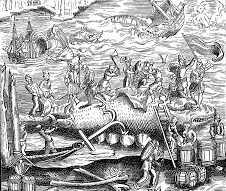 Because so few literate people went up there, the size of Smeerenburg and its facilities grew in the telling until folks back home were claiming that ~15,000 people were living and working in Blubbertown. Boston didn't grow to that size for 160 years. Subsequent writers tended to extrapolate from the very few contemporary reports, so that village became town; solitary wankers became a gaudy brothel; and reek of rancid fats competed with the smell of fresh bread from numerous bakeries. Recent archaeology indicates that at its height, Smeerenburg mustered only 19 dwelling! A permanent village turned out to be only a stop-gap. The whole enterprise closed down about 45 years after the foundations were laid. Whalers found it was more economical to process the dead whales close to the killing grounds. Readers of Moby Dick will remember the massive try-pots on the deck fed with fresh strips of blubber and fuelled by the crispers that remained when most of the fat had been boiled out of the tissue. Nothing went to waste in a massive jolt to the carbon footprint of the Western world.
Posted by BobTheScientist at 07:43