New word! I heard it pronounced bronquage which sounds exotic and medieval but the correct spelling branchage is what-it-says-on-the-tin: dealing with [over-hanging] branches. Branchage is a bureaucratic community chore required twice a year of all owners and occupiers who have road-frontage on the island of Jersey.  It seems to work on the principle of little and often is quite enough. The land-owners have to cut back vegetation, preferably with hand tools, so that the highways and by-ways of the island do not inexorably revert to jungle. On roads the edge must be cut back to a height of 12 ft = 3.6m; on footpaths only 8ft = 2.4m. The greenery on the "banque" must be cut to not less than 10cm, so that the plants are not ripped from the soil and thus have no chance to regenerate.  Attention must be paid to indigenous animals and rare plants, which is effectively impossible if you are using a mechanical flails from the back of a tractor. The clippings must be carried away. You can get the complete set of instructions - also available in Portuguese and Polish for the two largest outsider communities in Jersey. Branchage all sounds impossibly neat, tidy and, well, Protestant . . . wouldn't / doesn't work like that in Ireland.

I heard about this neat piece of community pressure from a friend who worked really hard and was able to retire on his money as he turned 50.  The Jersey tax-regime is kinder than Ireland's to well-heeled people but unless you play golf (or the fool) you're likely to get bored. I guess the weekend before the branchage inspection is something to look forward to: for the exercise and the sense of civic pride. Last year when we had a neighbour's help to round up our sheep and bring them off the mountain, he and I were walking down the green lane together behind the sheep. He pointed out that the lane used to be 4-5m wide but now can be a tight squeeze for a regular car, let alone a tractor. The margins between the dry-stone walls and the narrowing roadway have been allowed to fill up with gorse, brambles and over-hanging hawthorns. Have been allowed is passive tense because the community has had a generation of bystander effect - passively expecting someone else to clean back the bushes.

Nowadays, whenever I go up the hill - after sheep or after artefacts - I take a pair of gloves and ditto secateurs and snippety-snip at the brambles. It makes it less scratchy for walkers who, in summer, might be tempted to walk in shorts.  A few years ago, my pal Russ - A1 at Cheekpoint - undertook to clear an old green lane between his village and Passage East. It used to be a thoroughfare when people were up for walking 5 km to visit a friend or a different village shop. But the Celtic Tiger somehow stopped the use of Shank's Mare in favour of cars and the lane was getting jungly. Shortly after he set to with a  slashhook, one of the neighbours happened by, talked briefly and came back with shears and a rake. It got to be A Thing with some of the community; many hands make light work; the banter was savage; it was more entertaining than daytime TV; there was a visible change after each day's work. After that blitz, it should be easy to keep it under control with a rather light hand - maybe twice a year like the Branchageurs in Jersey.

The Branchage website records the times for this year's inspections:
Of course, me being me, I had to know if there was any pattern to these rather random dates. Perhaps parishes in the Atlantic-exposed parishes start pruning later because the weather made for a later Spring? But it turns out that there isn't even a first in - first out pattern between Spring and Fall clip-times: 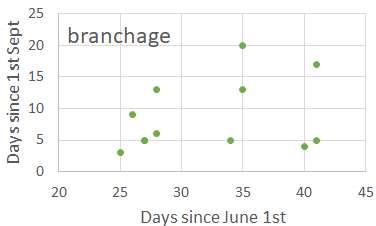 so for the moment I'll suspect that the dates are arbitrary and capricious. Although I have no evidence that the officials responsible (Connétable, Vingteniers, Centeniers and members of the Roads Committee) are anything other than reasonable.
Posted by BobTheScientist at 07:42