My Dad was born in 1917 and raised by Victorians. None of them had scientific information at their finger-tips but acquired a set of rules and values from reading the newspapers and listening to the wireless. As well as being super-regular about the timing of meals [lunch 1300hrs ± 2 mins], The Da propagated several food health-and-safety precepts suitable for raising children in a pre-antibiotic age. I've had difficulty shaking them in the years since.


Ptomaine is a grab-bag term for amine chemicals produced by certain bacteria as they work on dead things. Putrescine and cadavarine are two members of the family and you may guess where these compounds were first isolated. For years these products of pathogenic bacteria was seen as the cause of poisoning from eating old meat, furry vegetables and green potatoes rather than rampant bacterial growth in the gut and the reactions <flush flush> of the immune system.

He was wrong wrong almost right, because his vigilance protected us from green potatoes and ptomaine solanine poisoning. Solanine [first isolated not from Solanum tuberosum but from another member of the family Solanaceae Atropa belladonna deadly nightshade; from which we also get atropine prev] and chaconine are natural products of many members of the family which have evolved to kill or sicken animals which try to eat the plants. Potatoes turn green in the presence of light because the tubers are fooled by the blast of photons into producing chlorophyll to capture the energy of the sun. The same stimulus triggers the up-regulation and increased production of the steroidal glycoalkaloids whose structure is shown above.
*- "steroidal" because they incorporate the four rings of sterol found also in cholesterol, plant stannol esters and our mammalian sex hormones.
*- "glyco" from the three hexagonal ring structures clagged on to the right-hand end of the sterol chunk. Note this end is where the two molecules differ.  I'll leave you to find a 10 y.o. to play spot the difference between them.
*- "alkaloid" is a class of nitrogenous organic compounds of plant origin which have detectable physiological actions on humans. They are a subset of 'plant secondary compounds' which have supplied Pharma and shaman with many useful products. None of these compounds evolved because they provided drugs, medical and recreational, for people but because they messed over potential grazers in many weird and wonderful ways. 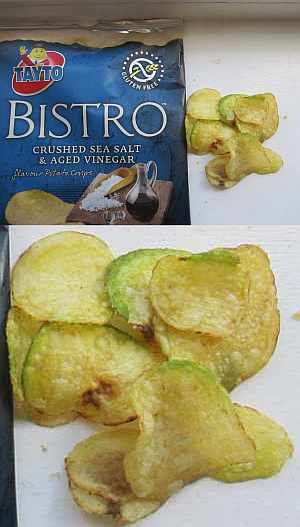 Solanine is quite stable and only marginally affected by boiling or frying; so it will still be active after cooking. And, although we do this, I don't think cutting out the obviously green bits is a good solution. The green chlorophyll is not the problem; it is only an indicator that the potato is more hopped up than it was when brown-and-white, The Solanine is quite likely to have bled into adjacent white-and-brown tissue.
What to expect if you eat enough: vomiting, diarrhea, headaches, paralysis of the central nervous system.
How much is enough? 40mg /100g of potato = 400ppm. That's a lot less lethal than Sarin but can still make your feel crook for  while and has been fatal in some cases. Read all about it in Smithsonian.

Why R I on a solanine jag? Because the family descended on us over the weekend [from W: Cork, E: Bath and N: Dublin] and someone bought a large bag of Tayto Bistro Crushed sea salt and aged vinegar potato crisps which soon disappeared - there were 8 adults and 2 children present -  except that everyone left the green chips [R] on the side of their plate. It's a case of paraphrasing Lady Bracknell "To get one green crisp, Mr Worthing, may be regarded as a misfortune; to get a dozen looks like carelessness".  I shall write to Mr Tayto to point out this QC failure. Of course, we could just suck it up but I get riled by nonsense labelling like "Gluten Free" on the front of these crisps as if potatoes would ever have any gluten in them. Like Fat Free Porridge Oats - about which I fulminated a few years ago. Never mind the gluten, Mr Tayto, can you assure us that there are no neurotoxins in your product? Imagine if we'd been eating these crisps while watching a movie - we might have consumed the green ones [and the solanine] as we blindly transported them from bag to gob without scrutiny.
Posted by BobTheScientist at 07:21