In the wee hours of Friday morning we had a mighty thunderstorm pass over our mountain. Having been brought to life by Dr Frankenstein the first rumble, I stumbled about the house unplugging the Wifi modem and and phone. We lost the last wireless phone-set to a lightning surge a few months ago and are currently working with a friend's cast-off. At the moment, as the Celtic II Tiger capers about, you could almost live for free off the things that the neighbours and supermarkets throw away.  I then set to obsessively counting seconds between the flash and rrrrummmble. Closest it got was 3 seconds = 1 km and it seemed like two events were showing off to each other - one effectively  on top of us and one 12-15 seconds = 4-5km away. Then I got bored and composed myself for sleep, but the flashes still came at me through my closed eye-lids. There was some very drummy rain as more of less the same time, but it didn't last long enough to worry me that the drains, running beside our single track access road, would be overwhelmed. 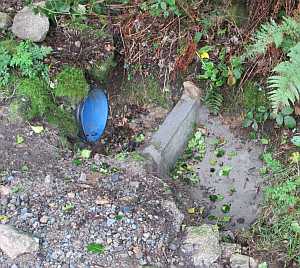 Nevertheless at 0600 hrs, I was up and out of the house to see if the lane was still there. After our experience from The Great Thaw of Feb 2010, you can never be sure. What happened was that one of several ⌀=30cm drain pipes got choked at the uphill end and the water spilled out into the lane itself, ripping great clefts and gullies through it. It has been a concern of mine ever since and last Winter I did something about my anxiety by building a single concrete block dam [shown R] upstream from our longest under-gateway pipe to catch any gravel in the rushing water and allow it a little time to sift to the bottom of the deluge. When it was almost too late, I remembered to open a 2-3cm drain-hole at the bottom of the dam so that any water can seep out of the silt. This most recent storm is really the first time when I had a proof of principle opportunity and, at 0600 yesterday, I was heartened to see the sump was almost brimful with road-sweepings: 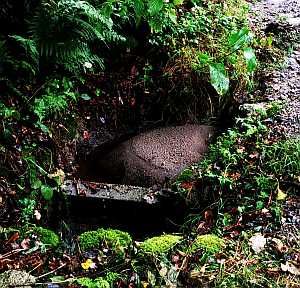 Which I duly shovelled out. Later in the day, the sump was brimful with dirty rain-water because the wee drainhole was blocked by a round stone about the size of my thumbnail. I think that's okay though: the current solution will let some sand and mud through but keep larger than a thumb-nail out.

Later in the day, we were comparing notes with Dau.II in Cork.  She had been looking at the same storm from her grand-stand view on the 4th Floor above Union Quay in Cork City centre. She called to make sure her parents hadn't been struck by lightning. Apparently a couple in Cobh had their house take a direct bolt which blew all the electrical sockets and light-fittings, but also also knocked a mirror and a fitted wardrobe off the interior walls . . . and left a smoking hole in the ceiling. Terence [or Terrance] Alcock, the man of the house, attributes his survival to the fact that he was wearing rubber sandals. I share this with the Interweb, in case the news of this miracle didn't reach Ukraine.
Posted by BobTheScientist at 07:26