People of my age will have had Reader's Digest in their orbit, even if they didn't read it. One of the regular features in the monthly pot pourri was It Pays To Increase Your Word-power - a lit of words and their definitions which the editor estimated might be an inch or two beyond the vocabulary of the readers. Recently, two words surfaced which were new to me, that happened to be anagrams.

Haptic is 'tactile' for knobs. Tactile is from Latin but the other work comes from Greek ἁπτικός (haptikós, “able to come in contact with”. Knobs here are not door-knobs but people who desire to impress with the erudition. For people like that Greek trumps Latin. Haptic has acquired legs, or rather fingers, recently with the growth of haptic technology where robots are being developed to carry out tasks previously needing the human hand,  1000 years ago, everything needed the human hand: sewing, hammering, flipping pancakes, driving screws, playing ping-pong. All these can now be carried out by robots. The very earliest technological advances were to replace human brute force with mechanical substitutes. Fulling mills for pounding cloth; steam hammers for flattening iron billets to make axes; these machines could definitely be caled up in a way that biceps could not. 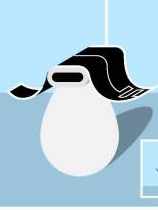 The delicate handiwork like sewing and marquetry held out for much longer but eventually fell to Isaac Merritt Singer and his mid19thC contemporaries. It's hard to imagine that nails were hand-made in medieval times and so valuable that old houses were burned to the ground so that the nails could be recovered for re-use. When you pick up an egg, the feed-back of your proprioceptic sensors allows your thumb and fore-finger to exert just enough pressure for the task. [R source] It took a while and a lot of scrambled egg for a robot to do as well as a 4 year old child. Robot Fail!

Micro-surgery works a lot better if the surgeon can get haptic as well as visual feedback: prod prod is less likely to become prod gush with both modalities engaged. If you can fit a surgeon with a haptic glove, that can scale up and out in amazing ways: then there is no need for the neurosurgeon to be in the same hospital or even the same country as the patient.

This haptic gig was launched by a techno-piece on the BBC about reading sign-language into text using an AI interface. Reading signs is a doddle for deaf-people and for deaf-allies like Dau.I who now has a formal qualification in Irish Sign Language ISL after enrolling in a teaching / conversation class paid for by Dublin City Libraries. That CPD [continual personal development] can pay off if you play your cards right. Human ISL readers have no problem reading the rapid waggling fingers in all orientations and distances. You can ear-wig on someone else's personal conversation on the other side of a railway carriage. The human mind can integrate fuzzy information: heck, they can read human faces to pick up evasions and insincerities.The problem with the translating ISL robots is that they need hard[ish] data to process. The lads at Google reduced the variability of human hands to 21 points representing the tips and joints of the 5 digits anchored to the wrist. Knowing that all hands are built this way makes it easier to read a 'real' hand from a variety of angles and from there it's relatively straightforward to translate the hesture to a letter.
I think that's enough: Phatic Haptic Part II to follow.