NASA ran out of astronauts as the programme got more ambitious, [and cut a few corners].
[M7] First were the original Mercury Seven appointed during the Eisenhower administration in April 1959. They look suitably Star Trekky in their helmets and lace-up boots: 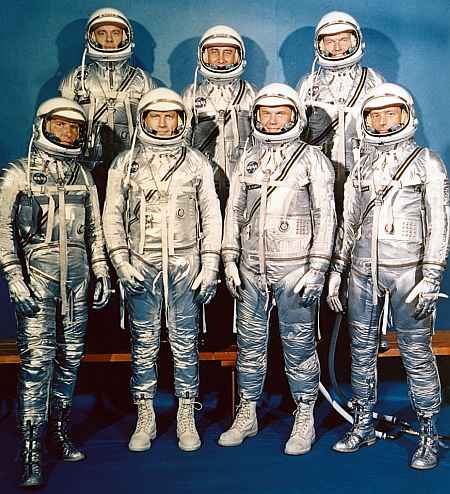 Back: Alan B. Shepard, Virgil I. "Gus" Grissom, and L. Gordon Cooper.
Front: Walter H. Schirra, Donald K. "Deke" Slayton, John H. Glenn, and Scott Carpenter;
Only 6/7 = 86% actually made to Space; Deke Slayton's heart problems had him nixxed as a health risk Up There; but he became a NASA magnate on Earth.
They're all dead now, the last to go being John Glenn, a 1984 US presidential hopeful. And don't forget Ham, the first primate in space, who went up before Alan Shepard, came down 15 minutes later and lived another 24 years in US zoos. And also remember Enos, the second chimpanzee and first malfunction casualty in the NASA hall of shame cock-ups: Enos didn't die from multiple electric shocks, he died a year after that ordeal from the bloody flux which proved to be untreatable with then current antibiotics.

Ted Freeman [TF] hit a flying goose coming into land a plane at Houston. Elliot See [NN] crashed his plane trying to land in poor weather at St Louis, taking co-pilot Charles Bassett [TF] into the ground with him.  CC Williams [TF] was also killed in a plane accident - aileron failure. Although all four planes were Supersonic T-38 jets, there is no suggestion that T-38s were inherently unsafe. Gus Grissom [MS], Ed White [NN] and Roger Chaffee [TF] went up in flames (loadsa velcro on the cabin walls, nylon space suits, design failures) on the launchpad in a practice from Apollo 1.

They Were Expendable was a book and a John Ford film about PT boats in WWII Philippines. It's a Boy Film. Nit a million miles from what my father was doing in the English Channel at about the same time.