I've had an interest in dams since I was a nipper with a bucket and spade in Duncannon in the 1960s. In January 2017, I got over-excited about Oroville Dam, a massive earth-filled flood-abatement project across the Feather River in N. California. Nobody likes a flood, especially if the water comes through your front door and covers your chintz sofa in diluted sewage. In Ireland, it would just grand if the annual average rainfall of about 1,000mm was delivered with modest regularity: say 10mm every third day between 0100 and 0500 hrs. That would be enough for the crops, enough to top up the reservoirs for drinking water, with a modest excess to generate a bit of hydro-electric. Ain't gonna happen!, though. What actually happens is that rain falls with unpredictable irregularity giving us weeks of drought, as last Summer, or damaging torrents which flood Clonmel, or Enniscorthy or Grainaguemanagh with predictable irregularity. At least in the first two cases, the floods are made worse because of cunning plans for flood abatement which defers a minor problem [elsewhere] to a catastrophe if the weather doesn't play ball with the hubris of engineers and planners.

Farmers and citizens in the Sacramento Valley in California were fed up with Spring floods, when the snow melted in the High Sierras with a bit of warm February drizzle and the riverbed was unable to contain the excess water. Soooo, they built USA's largest earth-filled dam to contain the floods and eke out the water through the growing season of the apricots, almonds and apples of California's Garden of Eden. With great cunning they incorporated a hydro-electric power plant in the dam structure . . . and a trout farm in the warm water of the rail-race. The water of the Feather River was turned from a threat to an opportunity. Until . . . the weather stopped playing ball and delivered a huge amount of water (after years of none-at-all) and the reservoir topped out to beyond the manageable expectable predicable quantities for which the dam designers had allowed. In 2017, the concrete surface of the aged spillway developed a small hole as the torrents of water came down. Torrents of water will rapidly turn a small hole into a large one and soon enough the voracious maelstrom was sucking at bedrock and sweeping it all downhill in a heap. As the erosion worked back towards the footings of the emergency spillway, it looked like that might fail to loose a Wall of water 10m high into the valley below where 100,000 people had homes. The worst flood imaginable - a 10,000 year flood - from the natural pre-Columbian pre-concrete times would have been a trickle compared to that. Over the succeeding months, I followed the management of the disaster and the successful restoration, and augmentation, of the flood safety net. One of the positives was the rise and rise of Juan Browne a pilot from N California, who took it upon himself to comment on the unfolding saga on his wife's Blancolirio youtube channel.

You may believe that we are living through The End of Days as climate change extends the range of natural weather beyond what we have so far taken as normal. The hottest July ever in Central continental Europe, record rainfall in UK, last year's parching drought. The Derbyshire town of Whaley Bridge has been in the news since last week when a big spill of rain filled the reservoir above the town and . . . the spillway failed just like Oroville. The reservoir has been hanging over the town since Whaley Bridge was joined to the English navigable in the 1830s. It is behind an earthen berm across a small stream and the front face of the spillway was faced with concrete: 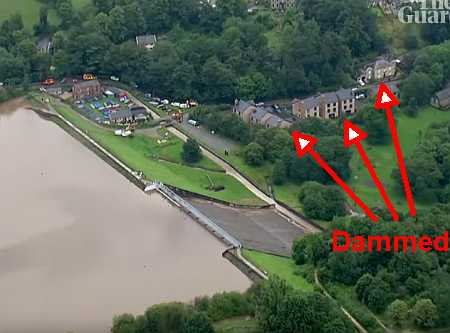 This year the rushing water winkled destructive fingers through small-small irregularities in the concrete surface, eroded the supporting clay beneath and collapsed some of the concrete panels. The management had to stop using the spillway and try to fill the cavity. 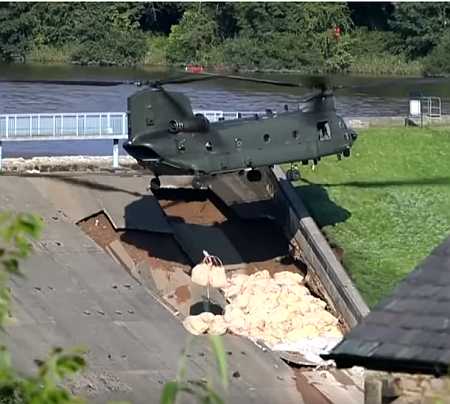 They called in an RAF Chinook to deliver hundreds of 1 tonne bags of fill, four-at-a-time, to help stop or slow down the erosion of the raw earth beneath the once-upon-a-spillway. And they sourced and leased the biggest pumps available in Northern England to lower the level of water in the reservoir so that nothing will travel over the damaged spillway 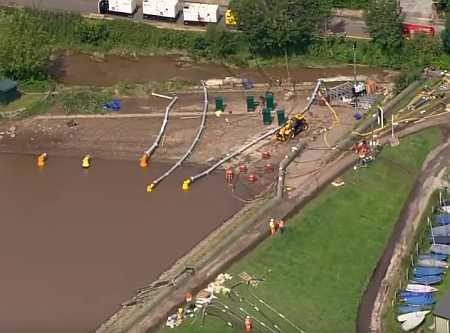 They've lowered the level of the water by 1.5m but a storm is forecast to dump another 100mm of rain across Derbyshire this afternoon. Whaley Bridge is not out of danger yet. Best commentary on Whaley Bridge from Juan Browne. To put it in perspective, the Whaley Bridge reservoir is 1.5 million tonnes of water, Oroville was a problem about 4,000x bigger.
Posted by BobTheScientist at 10:07