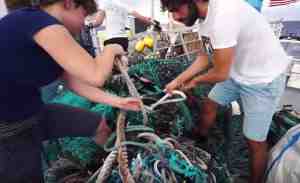 I just bought myself another set of garden secateurs €3 from ALDIDL. I think we have about a dozen knocking about the farrrrm in various states of usefulness. They take a hammering, not from pruning the roses but from filleting the tangles of ropes & buoys & nets & floats & hooks & pots which I find along the Waterford Coast. I don't need secateurs for boots, footballs, baby Crocs or driftwood: just a bag to carry them to the car-park., Indeed, The Beloved won't let me touch her secateurs because the fulcrum gets torqued out of true and they by-pass the rose-stems. Imagine having a job [above] detangling oceanic detritus and making an inventory of ghost nets in the Pacific Ocean. Ghost net is the technical term for hanks of orphan fishing gear lost at sea. 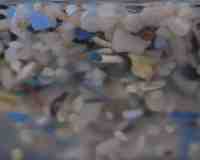 Boyan Slat is talking hot and hard about ghost nets, because microplastic [L in a sorting swirl in the Ocean Clean-up lab] is sooo yesterday. But more importantly, it's in recognition that it's easier to find and dispose of BIG chunks than the confetti that's left after the sun does it's photo-degradative work. "The French government offered a reward for ghost nets handed in to local coastguards along sections of the Normandy coast between 1980 and 1981. The project was abandoned when people vandalized nets to claim rewards, without retrieving anything at all from the shoreline or ocean [source]". Bounty incentives don't work for foxes or Tasmanian devils but have some success with lionfish. Boyan's key contribution is not to be disheartened by the vastness of the ocean and the low density of the the problem plastic. If you start somewhere with the biggest sweeper you can afford you're doing better than sitting on your sofa getting depressed about it and eating more crisps . . . out of  plastic. He has been pushing his boom broom [prev] solution but note that other people have different toolkits including microbial degradation of PET. His team has scaled to a 600m long sweep-net called Boomy McBoomface [woot! prev] made from HDPE = polythene. Here is that mother-if-all-booms being assembled in California. 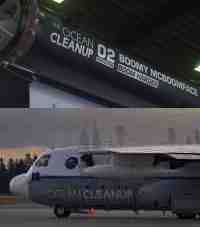 They were concerned that their sampling methods were biasing the data to small bits. If you use only a children's dip-net, you'll never catch a salmon worth eating. So he went round the marinas or Hawaii and California and recruited 30 yachties to participate in a coordinated sweep across the North Pacific Gyre in the hope of seeing some trees in the woods. There are lots of Silicon Valley millionaires who have retired on their money and can do what they want with their time and their yacht.That was partly successful and they fished out several clots of ghost-net. But Boyish and enthusiastic Boyan is a classic example of TED-fodder and a money magnet. So they next leased a Lockheed C130 Hercules transport plane loaded it with short-wave IR sensors and LIDAR [prev on land from the air] and cameras and did a two sweep aerial reconnaissance of the Gyre. Integrating the two sorts of data, they now estimate that 50% of the 80,000 tonne mass of plastic [and below]could be ghost-nets . . . and so 'easily' recoverable. Well, easier than sieving out 2 trillion barely visible microplastic shards, while leaving the same-sized living plankton in place. 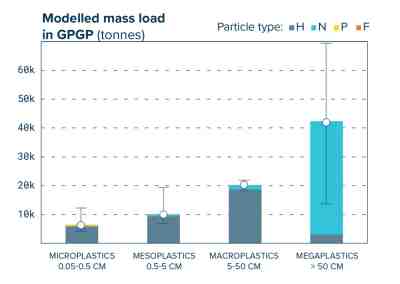 The Ocean Cleanup has a beautifully produced, informative and data-rich site.
The bold Boyan Slat is not the only one who is interested in sampling the oceans to assess the damage: data must precede solution! U Exeter have crowd-funded [they've exceeded their £20K target] an expedition to the Barents Sea in a romantic sailing ship. Barents Sea (not to be confused with Bering Sea on the other side of the Arctic) is the wet stuff between Svalbard [NO] and Novaya Zemlya Но́вая Земля́ [RU] not to be confused with Nova Zembla an island in the Canadian Arctic. Sails Against Plastic is not to be confused with Plastic Change a Danish sailing expedition to the Pacific. Confused? Me too!

I really hope that these parallel projects are talking to each other. I don't think I want them to merge to pool their resources yet. There is, of course, some duplication of effort but the positive aspect is that you have more creative heads working independently and banging those ideas up against each other to see which is best. Best for the Arctic may not be best for the Pacific, for starters.
Posted by BobTheScientist at 07:18