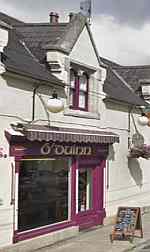 We had the whole family sitting down to dinner on Easter Sunday Pater [that would be Bob the Patriarch], Mater, the F1 generation and their partners, the F2 = Gdau.I and Gdau.II. It was lovely to see their shining faces but the table was barely big enough to give everyone elbow room . . . and to hold the mountain of thanksgiven food. Mr Dunne the Butcher in Btown supplied one of his monstrous organic chickens, but there was much more beside; not least because there are several veggies in the family. That chicken was r'ared a long way from those battery farms where it takes 41 days to get a chicken from hatchling to marketable weight. Two days later, everyone had dispersed to their own homes and I was left with a hape of chicken to finish off. There is only so much chicken curry that a fellow can eat and I had to freeze two tasty aliquots of chicken stock for later. This probably colours my verdict but really I wouldn't care if I never ate chicken again.  But I do realise that I'm in a minority here: there is a rolling total of 19 billion chucks on the planet and about 25 million of them are killed in the USA every day for people to eat. And Herbert Hoover did not define prosperity and progress as "A chicken in every pot" in 1928. That was Henri IV of France: “Je veux qu'il n'y ait si pauvre paysan en mon royaume qu'il n'ait tous les dimanches sa poule au pot.”

But for several years in the 00s, I had the option of a chicken for Sunday dinner because I was on the payroll of a massive study to look at Campylobacter jejuni in chicken. Campy is a natural commensal of chicken guts and present in all commercial and homestead chickens as a wholly benign presence. If any of these microbes transfer to your gut unkilled then you are going to be talking to the porcelain telephone for a couple of days and hoping that the transitory infection isn't going to develop into Guillain-Barré syndrome which will give you months of pain and paralysis. With the best of intentions, our studies were probably under-powered and used technology and analysis that could never give a definitive answer to explain why Campy was treated so differently by people and by chickens. I have been know to say "They gave us €1 million of tax-payers money to find the the best solutions for avoiding infection by Campylobacter jejuni and the answer is . . . don't wash your chicken". It's the aerosol, stupid, like with hot-air hand-driers, chickens all have Campy about their person; it is easily killed by cooking; you don't want to spray in over the kitchen counter, the salad or you hands.

That bold advice is echoed "Do not wash raw chicken. During washing, chicken juices can spread in the kitchen and contaminate other foods, utensils, and countertops" by the US Center for Disease Control CDC in Atlanta Georgia. Even though they are more concerned with Salmonella than the much more prevalent cause of giving at both ends Campylobacter. Well the shit hit the fan <frrrppppttt> across many communities across America! Huge and engaged comment [read the comments to poll middle America] on both sides of the wash/unwash divide. Marriages have collapsed over the matter and, being America, probably several spouses have been offed in gunfire for [not] washing the Sunday chicken. The story was rechurned by Metafilter where it garnered a whole lot more commentary, some droll, some informative. It's probably marginally more important than whether you put the milk in first but the passion with which people hold and articulate their beliefs on chicken-washing suggests that the position is not data-driven.
Posted by BobTheScientist at 07:27