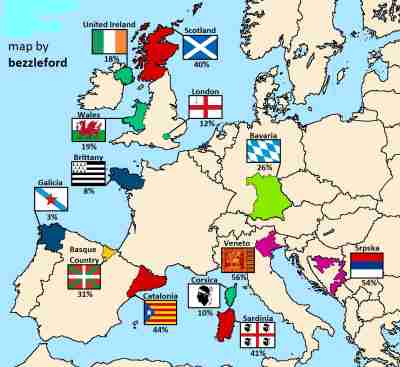 Title is Homage to George Orwell [prevoblobs] who was fighting there in the Spanish Civil War. Ever since I read H2C as a teenager - along with every other word of Orwell's that I could dredge up - I've flagged the Catalans as the Good Guys. The last hold out against the grey tide of fascism. I was schooled to adopt a less black-and-white view of Spanish politics when I got to be good friends with Pepe Malpica 25 years ago. There were good people on both sides of the barricades who were  sincere in their beliefs and anxieties. After such hideous internecine warfare comes to an end, you, me, we have to move on and the Spanish adopted a collective amnesia, so that after three generations the wounds are healing.

I don't really have a locus standi on the independence referendum that was carried out in Catalonia two weeks ago. It's the same sort of thing as Brexit, about which, as a horse European born in a stable in Dover, I have strong feelings. I believe in SS Europe The Good Ship Europa, especially the aspiration to equilibrate upwards: the belief that a larger market and free-movement would generate so much extra wealth that the poorest outposts of the continent would no longer be dispossessed. Poverty is not just about money, it's about culture and different ideas, and sharing. I found out last week that, in PIE Proto-Indo-European, the word for give was the same as the word for take. Back then on the steppes of Kazakhstan exchange was an essential part of life.
And please note, as did my pal Russ, that "believing in SS Europe" would stretch my politics further right than I feel comfortable about. Big red face on those nautical metaphors.

Strange Maps had a commentary on the prospects of succession in Catalonia which included the map at the head of this post which was created by redditor bezzleford.  I love that map: the flags [multiprev], the borders, the quirkiness of the displayed data, the unexpected findings and the new information.  The snapshot doesn't flag the changes to the map of Europe where a region has already achieved its independence.  Think Slovenia, the first of the regions of the Former Yugoslavia to go it alone.  They achieved this aim in a mere 10 Day War  of succession in 1991, at least partly because the central government in Belgrade was stacked with Serbs and there were only a handful of Serbs in Slovenia. 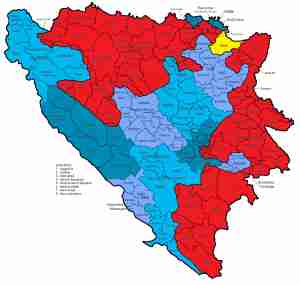 It was bloodier, longer and uglier in, say, Bosnia which I still associate with Srebenitsa, pogrom, and ethnic cleansing. And part of the reason for that is because the territory of Bosnia and Herzegovina was and is ethnically and religiously heterogeneous. Bosna i Hercegovina aka Боснa и Херцеговина is now separated into two autonomous regions with a yellow cherry on top called Brčko. [map L]. The red area is now an autonomous region of the country which calls itself Republika Srpska or Република Српскa. It is a separate auronomous entity from 'the rest' of the country Federacija Bosne i Hercegovine aka Федерација Босне и Херцеговине. It looks like a desperate example of gerrymandering but actually closely tracks the ceasefire line at the end of the Bosnian War. This wiggly line is known as the Inter-Entity Boundary Line Međuentitetska linija / Међуентитеска линија. Although there are two constituent parts of the country, there are three constituent ethnicities which fall out on consistent religious and linguistic lines:
There are three official languages, too, but they are essentially the same as variants of Serbo-Croatian. The Serbs preferring to write theirs in Cyrillic. The two blue exclaves at the top of this map don't make sense until you realise that they are just across the border from Croatia. And what about Brčko, the yellow hinge between the two flanges of Srpska?  There, the demographics between Serbs vs Bosniak-Croats are more nearly equal and it is currently run as a sort of condominium. According to the Guardian 3 years ago; it is a beacon of multicultural hope . . . a bit like Lebanon was before it collapsed into its own civil war 30 years ago. It will come as no surprise that Srpska appears on bezzleford's map with more than 50% of the inhabitants favouring independence. They have to sort out Brčko first, I hope they are less black and white there than they were in Sebrenitsa

Just about 15mm NW on the Eurosplit map above is another purple (>50% wanting out) enclave called Veneto which wants to pursue its own dreams independent of the rest of Italy. Where does that leave Friuli-Venezia Giulia [L. zoomed in and coloured red]? An exclave of Italy, is where! This map also identifies where Slovenia SVN and Croatia HRV fit w.r.t Italy, Austria AUT and Bosnia Herzegovina BiH. While self-determination is all well-and-good some consideration should be given to how your self-determination impinges on other people especially neighbours. Ireland isolated by Brexit, Friuli isolated Venexit, Brčko maybe disolated by Srpska in the future.

That-all only deals with geographic divisions. Many of the self-det movements are driven by an unwillingness to help neighbours less fortunate that ourselves.
Other self-det movements are pushed by a sort of romantic vision of history being used as an aspiration for a still rosier future. Last weekend there was an apologist for Catalan independence talking with Marian Finucane on RTE1 about how being a Catalan wasn't a matter of language or genetics but was a sort cultural sense of being. He mentioned that the Catalan 'spirit' had been stifled, if not actually crushed, by 300 years of Castillian misrule. To which Finucane chirped up that 'we' in Ireland had been similarly oppressed for 800 years by our larger neighbour. In her wobbly little noddle, I know that she was referring to my protestant ancestors. It's only a step from there for her to invite me and mine to go back where I came from to preserve the holy fantasy land of Ireland for Caitlín Ní Uallacháin and young subtle Conchubar, dancing at the cross-roads; Niall of the Nine Hostages tucking into colcannon, and Waterford winning the All Ireland. This is the most egregious sentimental nonsense: I have far more in common with a white man from Boston, a scientist from Turkey or a middle class professional mother of two from anywhere on the planet than I do with half the people whom I meet on the road home from work.

Patriotism? The last refuge of the scoundrel.
Samuel "Dictionary" Johnson