Dau.I is working in her dream job as a Librarian for Dublin City. As a public servant, she will have to submit 6 monthly PDR so that The Man can track her CPD. Continuing Personal Development and it's Reporting are now pervasive in work-places. It's just not good enough to do you job; every day and in every way you're expected to get better and better. If you're a tired old Union member you can bridle at this intrusion and continue doing the same-old same-old until you die of boredom and unfulfillment.  Or you can get some time off the treadmill on company time and go learn something new. That will be good for the company but will likely also be interesting for you. The problem is when the tail starts wagging the dog and employees go on dead boring courses offered by parasites on the CPD vulture just so that they can tick a box on the next PDR. No amount of free tea and fancy biscuits can compensate for a wasted day. 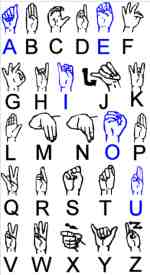 When she was down for His Blobbiness's bday last weekend, Dau.I said that she'd signed [arf arf] up for a course in Irish Sign Language ISL to better serve readers who are deaf. Two years ago, it was a big surprise for me to see that ISL is totally different from British Sign Language BSL which we used to trick about with in school. ISL is more similar in its conventions to French Sign Language despite using English as the background. Don't get confused here: ISL is not only effective in the Gaeltachts: it's mainly a way of spelling out words in any language that don't have their weird shorthand.

Sign language is so simple to grasp you don't even need to be human to master it. The most famous early adopter was a female lowland Gorilla gorilla gorilla called Koko, who was born on 4th of July 1971 in San Francisco Zoo. She was accordingly aka Hanabiko (花火子 fireworks child). She lived most of her life with Penny Patterson a developmental psychologist who earned her PhD on the back of teaching sign language to Koko and other gorillas. Yes, I am sorry to report that Koko's life is now past tense because the old lady of literate gorillas died on 19th of June 2018, in her sleep and in the fullness of her years, not quite 47 years old. Patterson has made a living out of the whole I-am-the-primate-interface show at The Gorilla Foundation. Head Office is across the Bay in Redwood City CA but the gorillas live in an adventure playground in the Santa Cruz Mountains.

Koko was the first gorilla to be taught how to communicate in this way but she followed in the sign-steps of Washoe a female chimpanzee Pan troglodytes who was tamed and trained and, well, humanised by Allen and Beatrix Gardner in the late 1960s. There are ethical issues about whether animals should be used for experimentation and much of the flak that whacked Patterson and the Gardners was the de-chimping of these animals. Washoe lived in with the Gardners and they dressed her up like a Brook Bond PG Tips advertisement. Koko got to hang out with Robin Williams and have a cross-species tickle-fest: a long way from science that was r'ared! And if your business model depends of donations from soft-hearted people with spare cash, kittens are likely to be a winner. [Donate Now] There are 100s of images of Koko playing with kittens like an 11-year-old child. I dunno, I think I would mark the Koko-Patterson axis as "mostly harmless", and not consciously dishonest or exploitative. But I share the skepticism of many scientists about the research into non-human language acquisition: it's a mix of delusion; confirmation bias; and hints of truth. An attempt to replicate the Gardner's findings by Herbert Terrace. Terrace's chimpanzee Nim Chimpsky [a poke/trubute at/to Naom Chomsky] was raised in a regular home and taught ASL. After many years of careful observation, Terrace concluded that none of the signing primates had language as linguists like Chomsky define language. They had mirror-neurons [prev], sure, and could imitate and remember the peculiar gestures of their human co-workers, but never master grammar or syntax which are the key attributes of our amazing form of communication. Words are not enough word-order is essential to meaning: chimp bites man is not the same as man bites chimp.  Hmmm, it happens: Travis, the chimpanzee pet of Sandra Herold, ripped the face of her friend Carla Nash in Feb 2009 and was shot to death when the Stamford CT police arrived, Nash survived and later appear on TV with Ellen DeGeneres. And there was he 'only in California' law-suit from 2005 in which two employees alleged that they were told to bare their breasts to better bond with the gorillas. After they were sacked they sued for wrongful dismissal, which loss they claimed was worth $1,000,000. I should work for the Daily Mail: they can be relied on to cast a peculiarly ugly pall over the stories they choose to deliver to the news-consuming public.

One of the key markers of true language acquisition and understanding, as opposed to parroting and imitation, is when the subject creates a totally novel phrase. Washoe famously called a first-seen swan "water+bird" which caused a witnessing psychologist to fall off his chair "it was like getting an S.O.S. from outer space". The fact that we are still taking about that same insight 50 years later, maybe suggests that these novel coinages weren't really common or reliable in primate-language-land. Koko managed "finger+bracelet" when she noticed someone's ring. otoh, when Koko signed something that was categorically incorrect, it was agreed that Koko was joking - and another tick was added to the positive side of the language-acquisition inventory. If you can never be wrong, then you're always right.


Posted by BobTheScientist at 07:40