Last week, the wireless was discussing a dopey "sounds good but probably silly" proposal to follow Taco Bell [R] and compel restaurants to add a calorific content to each item on the menu beside the price.
Why does it sound good?
Because you don't have to listen to Donal "Bariatric Band" O'Shea the HSE spokes-person on obesity to appreciate that people eat too much, maybe especially in restaurants when they don't have to wash the pans and dishes afterwards. When I'm Home Alone, which often nowadays, I often eat direct from the saucepan like a hobo because a) I have low self-esteem b) no standards and c) I ask why dirty a plate? when you can eat straight from the saucepan with a wooden spoon. I don't actually eat off the floor, though. We haven't had those sort of antics since Dau.II stopped behaving like a dog in her campaign to secure a puppy. Her 5 year old weasling reasoning was that, someone in the family had to eat from a bowl on the floor and without a dog, that task would fall to her. She was indeed correct because Rashers-the-dog appeared within a very few weeks.

Why are calorie menus silly?
Because it's difficult for a real restaurant to carry out the task with any sort of accuracy and even a half-arsed job is a huge administrative burden.  It's different for McD's and BoogerK and KFC: they serve a billion meals a day all to rigorous portion control standards. And I notice from googling "calories + menu + images" that many such give a range of calories rather than getting stupidly specific.  A Talking Chef on the wireless was worried that a Calorie Law would cramp his style: If they had a lot of cream on the cusp of 'off' they might lurry more into the potatoes dauphinois which would Up the fat&energy concentration and have them caught with their calorie-pants down in a razzia by the Food Police. 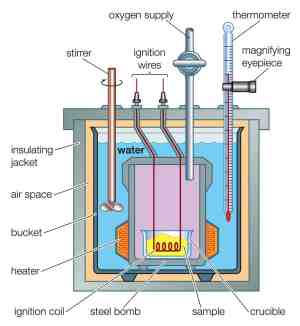 That set me to thinking how the Lebensmittelpolizei might actually carry out an audit . . . and 'bomb calorimeter' floated up from the abyss of memory. The cross-sectional diagram [R] looks complicated but the principle is simple. Add a measured quantity of the potatoes dauphinoise (or a portion of Nigella Lawson if you prefer) to the crucible in a sealed container containing enough oxygen to fully combust the spuds. Ignite! The steel container is called a 'bomb' maybe ironically because it is designed not to explode when the potatoes start to burn up. All the energy given off when the oxygen combines with the carbohydrate is captured as heat . . . which raises the temperature of the water surrounding the bomb. Precise measurement of that increase in temp [note the magnifying eye-piece] will allow you to calculate the energy in, say, 5 g of creamed spuds. That is multiplied up by the portion size to get a calorie count for that item on the menu. Repeat for the poisson du jour en croûte de chorizo, the haricot rouge et petits légumes en ragoût, and the Schwarzwälder Kirschtorte.

You could do this, but the chef would be really reluctant to change the menu, or start adding more butter; and the restaurant would become known as the most boring place in town.  I guess it would be too much to ask the Plain People of Ireland to look up what is the calorific value of meat, potatoes and cabbage and then use that as a guide to choosing their meal. People like me and Pat the Salt, who were trained from an early age to polish our plates and leave nothing for the chickens, could benefit from  smaller portions. No government is about to intrude in the market to the extent on enforcing portion control; but they are quite happy to create a further layer of bureaucratic regulation. Maybe we should give up the ould pharmaceuticals and go back to training food technologists at The Institute: there will be jobs-for-the-boys-and-girls.

You can do this at home, kids . . . or certainly in a school science laboratory following a Nuffield Science protocol.
Posted by BobTheScientist at 07:25