A short walk by the river

A large part of the economy involves the proletariat (that's all of us) being entertained in exchange for money. I have grown to be suspicious of these transactions as they have become monstrously expensive and ephemeral and people who have money buy into the system because they can. A staff round-robin e-mail this Spring offered four unwanted tickets to the 23Jun18 Billy Joel concert for €460! My eyes were on staaaalks: half a Grand for 2 hours in the Aviva stadium with a lot of other crumblies? That amount of wedge would be really appreciated by your nearest struggling single parent. You could reprise your 1970s memories on youtube - Uptown Girl - Piano Man - while feeling virtuous that you hadn't been supporting Aiken Promotions.

My roomie at work is in some sense in charge of all the post-graduate students, despite only having 3 under her direct care-and-attention. To mark the end of the school year and the start of Summer, she canvassed opinion about what they/we might all do together to celebrate. "Let's go ten-pin bowling" came back. It wasn't strictly my business but I bridled at that suggestion as being unimaginative and costly [R for indicative prices]. I explained my baggage: all through the 00s, I was a comparative immunologist in a lab that cared about the whole person and sponsored an annual lab outing. The Lab murthered The Boss paintballing; played soccer in Glendalough; did corporate bonding in Blessington; walked along the cliffs in So Co Dublin; did the Tayto Theme Park; yomped to the top of Mount Leinster and then had a BBQ. You can see the conflicting pulls here: the Girls Just Wanna Have Fun vs me and The Boss preferring something more thoughtful which promoted cohesion and kindness over noisiness and the haemorrhage of money. 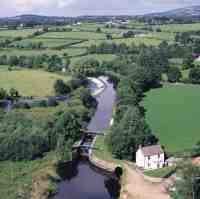 I therefore suggested a) a walk up a hill from our farmlet or b) a walk by the river for the altitude challenged. And it was so! It was agreed that, on the last Friday of June (yest) we would walk from Clash [R] to Graig along the tow-path of the Barrow River Navigation with ice-creams promised at the end. I've done this before and before that Ten of us piled into two cars setting off from The Institute at 3PM. It was shoving 30oC, but we knew it would be cooler by the river. There were only 2 Irish Citizens: one a New Irish born in Senegal. The rest: Greece 1; Britland 1; Poland 1; France 1; Germany 1; India 3. I dunno what it is about the Irish, who make up half our post-grad community: they just don't seem up for getting out and about. I suggested that we could sing River songs in the back of the car on the way to Launch-point:
And eeee it were luvly. But I have to report that the girls in the back of my car were planning a trip later on to the Tayto Theme Park!

Posted by BobTheScientist at 08:49